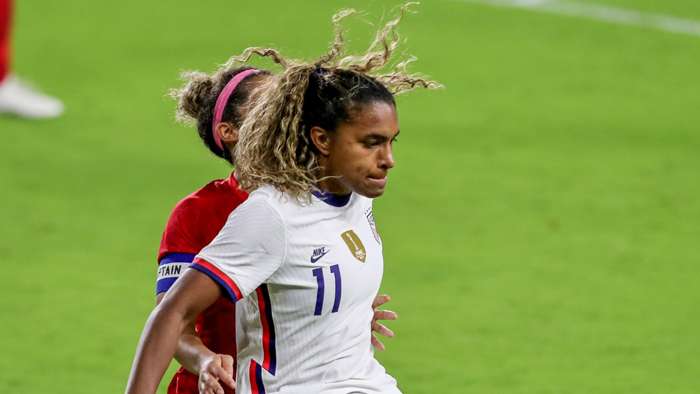 U.S. women's national team midfielder Catarina Macario will miss the upcoming SheBelieves Cup finale as she has left the team to return to France.

The former Stanford star started in the USWNT's 1-0 win over Canada to open the tournament but did not feature in Sunday's 2-0 triumph over Brazil.

"U.S. Women’s National Team midfielder Catarina Macario has returned to France and Olympique Lyonnais in order to complete her government-mandated seven-day quarantine so she can be prepared and eligible to play in the club’s UEFA Women’s Champions League Round of 16 first leg match against Danish side Brondby on March 4," U.S. Soccer said in a statement.

"Macario’s departure was previously agreed upon between OL and U.S. Soccer prior to the tournament."

Macario, who was born in Brazil but moved to the United States at age 12, is one of the more highly-regarded USWNT prospects in recent memory.

The21-year-old phenom emerged as a star during her time at Stanford, and, after earning U.S. citizenship in the fall, shewas approved for a one-time switch to the U.S. on January 13, paving the way for her to play for the USWNT.

Five days later, she earned her USWNT debut, featuring against Colombia. She scored in her second USWNT match, also against Colombia, as she provided the opening goal in a 6-1 rout.

On the club level, Macario opted to forego her senior year of college and a chance to play in the NWSL as she opted instead to sign a two-and-a-half year deal with French powerhouseLyon.

Shedebuted for Lyon in theDivision 1 Feminineon February 6, featuring in a win over Montpellier.

They'll host Brondby for their first leg on March 4 before then traveling to Denmark for the second leg six days later.

As for the USWNT, Macario figured to be a key part of the Olympic squad when the U.S. takes part in the competition this summer.