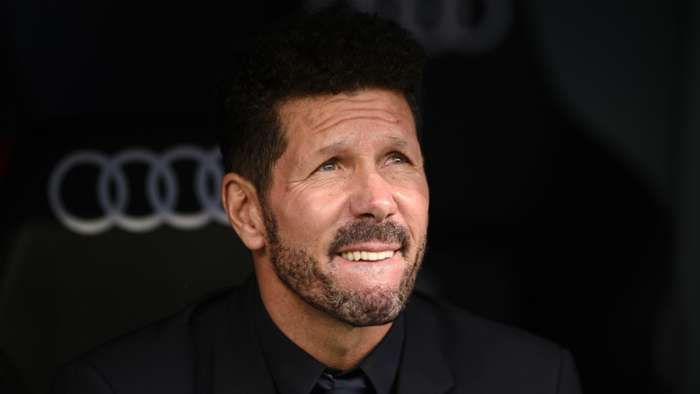 Diego Simeone played down the importance of Atletico Madrid's upcoming clash with Barcelona after they moved top of La Liga.

Atletico extended their unbeaten run in La Liga to 23 games – the most in their history – with a 4-0 thrashing of Cadiz on Saturday.

Joao Felix scored a brace and goals from Marcos Llorente and Luis Suarez at the Wanda Metropolitano moved Atletico onto 17 points from seven league games.

Simeone's men will host Barca after the international break, but the Atletico coach said it would not be a decisive clash as they prepare for a prolonged title charge.

"They know us, they know that beyond happiness we do not depend on what is going to happen in the game against Barcelona," he said.

"There are 15 days left, players leave with the national team, we will have to wait for the time we have and we do not move away from that.It is our way of thinking and we live in the next game.

"We will see when the players return in what conditions we see them and we will form the teams accordingly."

Since being humbled 4-0 by Bayern Munich in the Champions League last month, Atletico have won four of five games.

Simeone praised the form of his side, who are joined by Real Sociedad – who have played one more game – on 17 points at the top.

"What generates enthusiasm and enthusiasm for me is what has happened since the draw against Huesca or Villarreal or the defeat in Munich," he said.

"I see the team well, with dynamics, enthusiasm, strength, desire to do things and see how we evolve in training.What makes me happy is that those players who had fewer minutes like Mario Hermoso, Hector Herrera or Llorente last year, today are being very important in the team.

"There is an improvement far beyond today's result.We play with four midfielders who can occupy many places.I think we have a balanced squad.