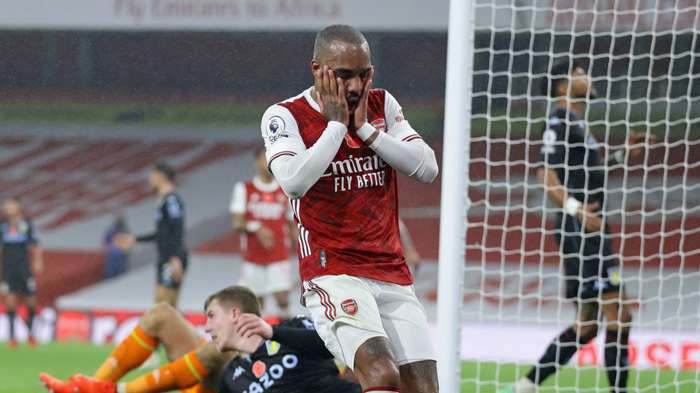 Ian Wright has explained the main reason behind Alexandre Lacazette's loss of form, insisting the Arsenal striker is "thinking about the consequences of missing" instead of playing on instinct.

Lacazette has scored51 goals in 135 appearances for Arsenal since moving to Emirates Stadium from Lyon for £47 million ($62m) in the summer of 2017.

Three of those goals came in the Gunners' first three Premier League fixtures of the new campaign, but he has not found the net since a 3-1 defeat to Liverpool on September 28.

The 29-year-old has been guilty of wasteful finishing as Mikel Arteta's men have struggled to add a clinical edge to their game, with his latest miss proving costly during a clash with Aston Villa on Sunday .

Lacazette headed a Kieran Tierney cross over the bar from point-blank range when Arsenal were trailing by a goal in the first half at the Emirates.

The hosts went on to lose the match 3-0, slipping to 11th in the Premier League standings in the process, and Wright believes the French striker is stuck in a rut which can only be fixed if he stops worrying about making mistakes.

"I was talking about Mikel and how offensive he wants to be, and it’s literally impossible in this team," the Gunners legend said on the Wrighty's House podcast.

"I saw some stats about Lacazette’s average position. For a focal point, he’s not near it.

"With the chance he had, for me, even with no one in the ground, you could see he’s going through that spell as a forward where he’s thinking about his next chance.

"Where that ball came in, you don’t need to think about it, you just need to get it on target. Just control it.

"I believe that even with no fans in there, he’s thinking about his next chance.