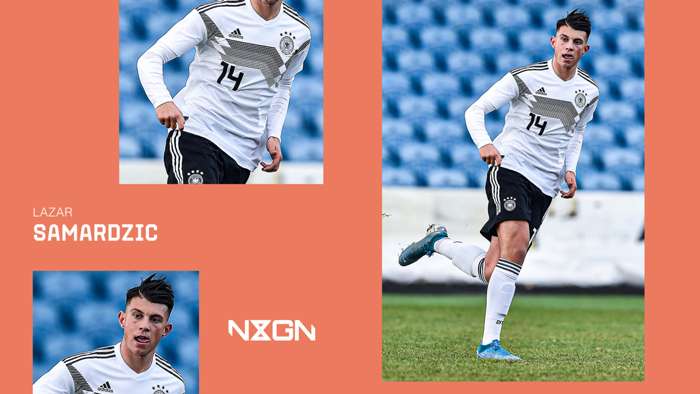 The future of Kai Havertz is unsurprisingly the hot topic among German football fans right now.

Potentially the leader of the national team for the next decade, the Bayer Leverkusen playmaker's potential summer transfer is likely to continue dominating the headlines until a resolution is met.

And while the 21-year-old looks destined to leave the Bundesliga behind and join Chelsea, there is a potential heir waiting in the wings to take the German top-flight by storm.

Ever since video clips ofLazar Samardzic effortlessly skipping past defenders appeared online there has been hype around the Hertha Berlin teenager.

That fanfarebegan to come to fruition in the closing stages of the 2019-20 season as the 18-year-old made his first steps into senior football, and the hope is that he can help lead the capital club towards a brighter future.

He could also, however, be about to follow Havertz out of the country, with Barcelona and Juventus reportedly leading the chase for his signature.

"Laki is a street footballer who is simply fun to play with," former Germany youth coach Michael Feichtenbeiner tellsGoalandSPOXof a player he worked with for three years at schoolboy level.

"It was really a lot of fun with Laki in the three years.Back then he was a bit reserved, but you always saw a mischievous smile from him.

"The more familiar we became with each other, the more he felt like joking with me!"

Samardzic has always had a roguish mentality ever since he joined Hertha's academy at the age of seven having begun his footballing education at Berlin-based clubBSV Grun-WeissNeukolln.

He earned admiring glances throughout his youth career due to his penchant to attempt - and largely succeed with -extraordinary manoeuvres, including meandering dribbles through opposition defencesand goals from inside his own half.

At Under-17 level he scored 40 goals and laid on 14 assists in 40 appearances over the course of two seasons - performances that saw him take bronze in the Fritz Walter Medal awarded to the best German U17 players in September 2019.

Having stepped up to represent the U19s last season he provided 14 goals and nine assists in 16 games while also making a number of reserve team appearances ahead of his first training sessions with the senior squad in February.

"He's a really exciting player who arouses a lot of imagination in us," then-Hertha manager Alexander Nouri told reporters of Samardzic's ascension. "A great playmaker who reminds me of Max Kruse with his good spatial perception and his peripheral vision."

At international level he has also moved through the ranks since Feictenbeiner first suggested he be called-up to Germany'sU15s team.

He made his international debut for the U16s in September 2017 before forming part of the squad which travelled to Ireland for the U17s European Championships in the summer of 2019.

It was there he scored an audacious Panenka penalty against Austria in Germany's final group match, withFeichtenbeiner saying that: "This action describes his way of playing football perfectly.He's mentally strong and has the courage to take on responsibility in special moments. It's good when players at this age have that courage".

Back at Hertha, Samardzic's opportunity to finally make his first-team debut came in May as new manager Bruno Labbadia introduced him off the bench for the closing stages of their derby victory over city rivals Union Berlin.

He went onto make further substitute appearances against Borussia Dortmund and Eintracht Frankfurt, with Labbadia now keen to see the left-footed No.10 work on the defensive side of his game so he can be offered more opportunities to impress.

"In all his youth he had a lot of freedom, but he doesn't get these freedoms in senior football," Feichtenbeiner says from his new home in Kuala Lumpur, where he is the sporting director of Malaysian club FA Selangor. "He still has to improve."

Whether he will make those improvements at Hertha or elsewhere is, for now, unknown.

Samardzic missed the start of Hertha's pre-season training programme, with it suggested that he and his father wereinstead abroad attempting to negotiate a transfer to another club.

As well as Barca and Juve, the likes of Chelsea, Manchester City, Benfica, Atletico Madrid and AC Milan have all been linked with moves for the teenager, whose contract in Berlin currently runs through until the 2024.

And so while this current transfer saga might not be getting the same attention as Havertz,German fans would be wise to keep an half an eye on where Samardzic is playing his football next term.