Leaving Liverpool was the best thing for my career - NXGN star Hoever on Anfield exit, training with Traore & impressing at Wolves 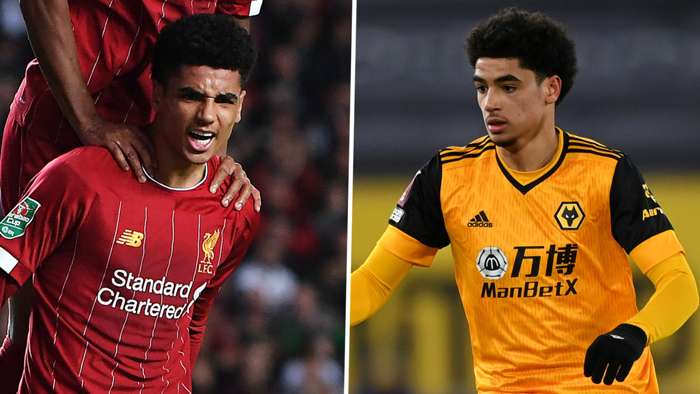 As far as Ki-Jana Hoever is concerned, there are no regrets.

Much has changed since the Dutchman chose to swap Liverpool for Wolves back in September, but one thing certainly has not.

This young man’s star is very much in the ascendancy.

“Sometimes I feel old,” the 19-year-old laughs, settling down for an exclusive interview withGoal.

“It feels like I’ve been around for a long time, you know?”

We know. Hoever only turned 19 in January, but this is the third year in which he has featured as part of NXGN,Goal’sannual list of the 50 best wonderkids in world football, placing at No.33 in 2021.

“The years went quickly!” he smiles. “But I’m still young, and I know I have a lot more ahead of me.”

It is perhaps fitting that Hoever, a European champion with the Netherlands at Under-17 level, has ended up at Molineux.

It was there, after all, that he made his professional debut for Liverpool, in an FA Cup third-round tie in January 2019. At just 16 years and 354 days, he became the third-youngest player in Reds history.

“Yeah, good memories!” he says. “I remember at that time, everything went really quick. The first team had some problems with injuries, I was training with them and then I was on the bench at Wolves.

“My mindset was that hopefully I could play, make my debut and get some minutes, but I didn’t expect that from the sixth minute I would be playing!”

Hoever had moved to Merseyside from Ajax in the summer of 2018, and made an immediate impression. In his very first training session with Jurgen Klopp’s squad, he left senior players purring for the manner in which he handled the not-inconsiderable challenge of marking Mo Salah.

He would go on to make four competitive appearances for the Reds, scoring once in a Carabao Cup win at MK Dons. Able to play at both right-back and centre-back, he was earmarked as a player of huge potential by Klopp and his staff.

The emergence of Neco Williams, though, complicated matters. The Wales internationalbecame Trent Alexander-Arnold’s understudy last season, while Hoever spent the bulk of the campaign with the U23s.

His final senior outing came last February in an FA Cup win over Shrewsbury Town at Anfield. A few weeks later he was on the bench at Watford, his one and only appearance in a Premier League squad for Liverpool.

So when the opportunity to join Wolves arrived last summer, he jumped at it. He still had two years left on his contract at Liverpool, who were keen to renew, but he wanted a clear pathway to regular first-team football, which the champions simply could not provide.

“It wasn’t an easy choice, but it wasn’t that hard either,” Hoever says of his decision to leave Liverpool.

“I knew my playing time would be more than at Liverpool, that’s why I made the decision. I thought it was the best thing for my career in the moment.

“Now of course with the injuries [at Liverpool], you don’t know, but I don’t think like that. I just thought like, if everyone was fit, how much game time would I have? Liverpool have such a great team still, maybe the best back four in the world, so it was really hard for me to break through there.

“And here the idea was good. I would be really involved in the squad, really a first-team player. It’s basically been what I expected, but I know I can still do better than this. It’s a good first season so far.”

Hoever says he did not speak to Klopp before leaving, but he remains in touch with several of his former Liverpool team-mates, including countryman Virgil van Dijk.

“He was really good to me,” he says. “And still if I need anything, I can give him a call or a text and he will help me. Virgil is a really nice guy.

“It doesn’t matter who you are, if you are next to him he will make you look really good at defending! When I trained with him, he would speak with me in Dutch and he coached me, where to be, when to drop, when to step up. He took responsibility. I just had to listen!”

Hoever has settled in well at Wolves. His debut came at West Ham in September, and by December he was ready to start in the Premier League at Old Trafford, impressing even as his side fell to a heartbreaking late defeat.

There have been a dozen appearances to date, including outings at Chelsea and Manchester City. Quick, athletic and comfortable in possession, Hoever appears ideally-suited to the wing-back role in Nuno Espirito Santo’s trademark 3-4-3 system – though he says he’s happy to play as an orthodox right-back or in the middle if required.

“He’s a really good coach,” Hoever says of Nuno. “He helped me a lot with all kinds of stuff.

“When I came here, it was mostly the style of play which was new to me, and the way they defend. I think now I know how to do it. I still train on it every day but in the beginning it was a bit difficult.”

He smiles when it is suggested he hashad plenty of practice when it comes to defensive training. As a young full-back, facing the likes of Salah and Sadio Mane, and now Adama Traore, must be some education.

“Yeah!” Hoever laughs. “From the start when I was training at Melwood, I’d never met a world-class player like that. But I was focused, I was ready.

“I’m quick, and that helps because I can make things right with my speed. When I first came, I wasn’t really strong for a centre-back. Maybe if you saw me you’d think I was a bit skinny, but if I really try hard then I’m quite strong!”

“He knows that I’m bigger and stronger now!” Hoever jokes. “It’s really difficult to defend him, because there’s basically no player like him.

“Normally you have a winger who is quick, and there’s a way to defend him. With him, it’s really hard. If you get too close, he can turn you and he’s really strong, and if you give him a bit of space he will use it to dribble as well.

“It’s difficult to defend him good, but to train with him every day, it’s very good for me. I’m learning every day.”

Hoever is part of a new generation of young, gifted Dutchman, many of whom feature on this years NXGN list.

He played with the likes of Ryan Gravenberch, Kenneth Taylor, Brian Brobbey and Jayden Braaf in theAjax academy, and alongside PSVstarlet Mohamed Ihattaren with the national team.

His favourite app, he says, is LiveScore, which he uses to check on his pals’ results and performances.

As for himself, the aim is simple; keep going, keep pushing, keep shining.

“For me it’s about improving and being ready,” Hoever says. “We have a small group of players, so you don’t know when something might happen. You need to be ready.

“I’m just waiting on my chances. This is just my first year in the Premier League, I’m happy but of course I want to play more and more and more every season.

“I just have to keep working hard in training, to be better every day, and then I’m sure I will accomplish what I want to at this club.”

Watch out for Ki-Jana Hoever in the coming months and years.