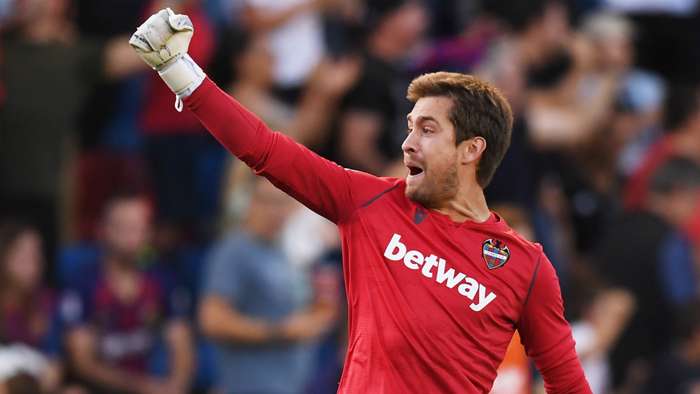 Levante goalkeeper Aitor Fernandez has claimed that Arsenal showed an interest in his services during the summer transfer window.

The 29-year-old has racked up 65 appearances forPaco Lopez's side in total, helping them comfortably retain their status in the Spanish top flight.

Fernandez is contracted to remain atEstadi Ciutat de Valencia until 2023, but he was tipped to complete amove away from the club at the end of the 2019-20 campaign.

The Spaniardhas now revealedthat both Arsenal and Athletic Club made plays for his signaturebefore he ultimately decided to stay put due to the love and support he enjoys from Levante's fanbase.

"The club transmitted calmand I wanted to stay. We looked at the fact I'd got the affection of the fans. It's true there was contact withAthletic Bilbao and Arsenal," Fernandez told AS.

"Quite a lot of clubs have asked and it's true those two did ask. I feel I have lots of support at Levante."

The Levante star went on to admit that going back to Athletic, the club where he began his career, still holds great appeal, but he is in no rush to bring his successful spell at Levante to a close.

"In the end, the club gave me that tranquility that they wanted me to stay here and I wanted to stay here," Fernandez added."With my partner, we value that havingthe love of a hobby is not easy.

"The truth is that my sportinggrowth was here.It is also true that I have said that throughout my career I would like to go home;but I think this is not the time, I think it is time to continue growing in Levante."

Arsenal dipped into the summer market for a new goalkeeper after seeing Emiliano Martinez complete a £20 million ($27m) move to Aston Villa.