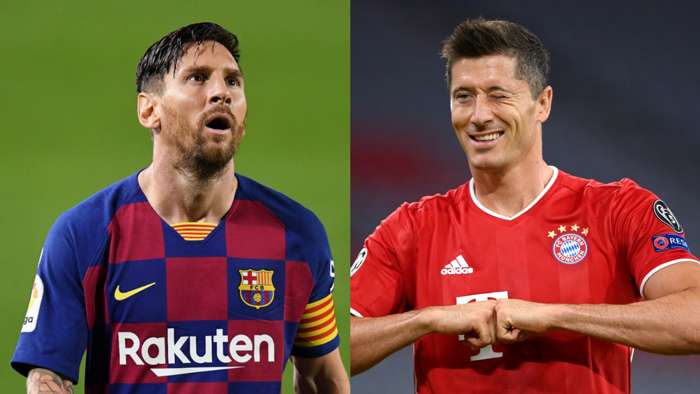 Arturo Vidal is well aware of the threat posed by Robert Lewandowski ahead of Barcelona's Champions League quarter-final with Bayern Munich, but remains convinced Lionel Messi gives the Blaugrana the edge.

Both Barca and Bayern came through their last-16 ties relatively comfortable in the end, Quique Setien's side beating Napoli 4-2 over two legs and the German champions crushing Chelsea 7-1 on aggregate.

Such an emphatic progression, coupled with their form after the coronavirus-enforced pause, has led to many deeming Bayern to be frontrunners to win the competition.

Lewandowski will surely be crucial if they do go all the way -the Poland striker having scored 53 times across all competitions this term, including 13 in just seven Champions League matches - but claims from former Bayern players that Lewandowski is ahead of Messi are wide of the mark, according to his formerteam mate Vidal.

"Lewandowski is extraordinary, very dangerous, a tireless scorer," the Chilean told reporters ahead of the showdown on Friday. "I was with him three years; I know how he prepares. It will be very difficult to stop him, but comparing him with Leo Messi is impossible, because Leo is from another planet, although Lewandowski is the best striker alongside Luis Suarez."

Setien agreed, stating: "Lewandowski is a great footballer but I don't think he's up to Leo's level. It's clear, Lewandowski is in a great moment and he's very well assisted by team-mates who can hurt us, but we also saw Leo against Napoli. It's good that we can enjoy footballers like that."

Another player who has caught the eye since the Champions League's resumption is Neymar, who produced a typically exuberant – albeit somewhat wasteful – display as Paris Saint-Germain claimed a dramatic2-1 win over Atalanta to reach the last four on Wednesday.

The Brazilian is reportedly a long-term target of Barca, the club he left to join PSG in2017 for a world-record fee, and Vidal acknowledged that Neymar would strengthen theBlaugrana.

"It is understood that Barca wants to recover him Neymar, not only because of yesterday's game," Vidal said. "He was already at Barca and had an exceptional performance, he showed his level. He is very talented and would help the team a lot, but I don't know more.