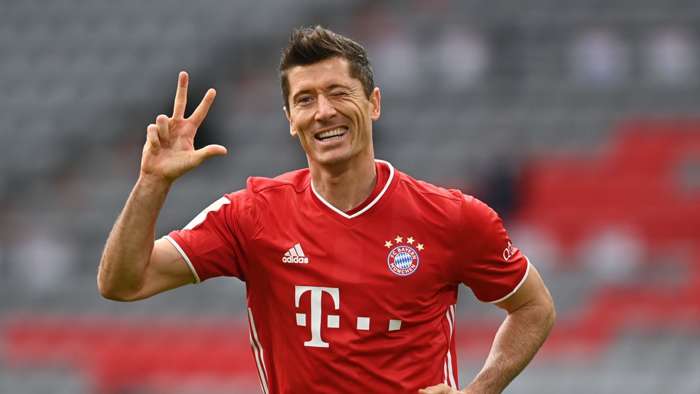 Bayern Munich striker Robert Lewandowski has wasted no time in breaking double figures for Bundesliga goals this season, setting a new league record in the process.

That sterling record was key to Bayern's efforts as they were crowned German and European champions, prevailing in August's final over Paris Saint-Germain to win the latter.

If the first few games of 2020-21 are any indication, though, Lewandowski is on track to surpass his efforts of last season as he continues to find the net on a remarkablyfrequent basis.

The striker netted a hat-trick within an hour on Saturday as Bayern ran riot against Eintracht Frankfurt, winning 5-0 at the Allianz Arena to rack up their fourth victory in five Bundesliga matches.

Leroy Sane also got his name on the scoresheetfor the hosts, as did teenage substitute Jamal Musiala,but all eyes were on Lewandowski as he reached a notable milestone at the expense of Frankfurt.

He has now hit 10 goals in his first five Bundesliga outings, reaching double figures quicker than anyone else in the league's history.

Unsurprisingly that lethal record has sent him racing to the headof the top scorer rankings, withAndrej Kramaric his closest competitor on six goals for Hoffenheim.

Lewandowski has been with Bayern since the summer of 2014, when he moved on a free transfer from Bundesliga arch-rivals Borussia Dortmund.

With the Pole's goals in tow, the Bavarians have been near-unstoppable in Germany, winning every league title disputed since that move was completed.

Lewandowski now boasts 256 goals in 297 games for Bayern, a mark that places him second in the club's all-time top scorer standings.