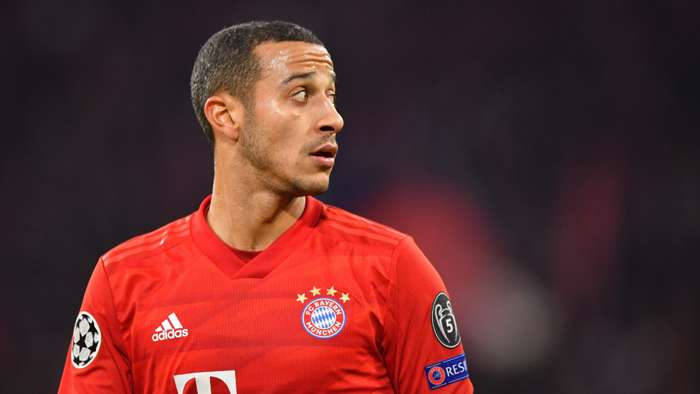 Thiago Alcantara insists that he has not told anyone that he isleavingas speculation continues to suggest that the Bayern Munich midfielder is destined to link up with Liverpool or Manchester United.

Links to Premier League heavyweights emerged for the Spain international prior to the 2019-20 campaign coming to a close.

Bayern have been unable to put fresh terms in place with Thiago and will see his current contract at the Allianz Arena expire in the summer of 2021.

Prominent figures off the field in Munich have conceded that a prized asset may have to move on, with there no indication that an extended stay will be agreed.

That has kept the likes of Liverpool and United interested, with those at Anfield said to have been tracking Thiago for some time.

The 29-year-old playmaker is, however, adamant that he has taken no decision on his future, with his focus locked on UEFA Nations League duty and a meeting with Ukraine on Sunday.

He told reporters are a pre-match press conference when quizzed on the exit rumours that he continues to generate: “I have not told anyone that I am leaving.

“Every year you put me in a different club.

“For me my future is tomorrow's game and there is nothing to discuss on this. I neither care nor am I interested. My interest is in tomorrow's game.”

While England would appear to be Thiago’s most likely landing spot if he is to leave Bayern, a return to Barcelona for the La Masia academy graduate has been called for by some.

Blaugrana goalkeeper Marc-Andre ter Stegen has said: “I would like to have Thiago at Barca. His style suits us and he has an interesting personality.

“He is a special type of player. He would definitely offer us something different. If he did sign it would be great for us and him.”

Thiago responded to those comments by saying: “It is an honour that Marc says my name, because he is an incredible goalkeeper, but he is not the technical director of any team and there is no need to give an answer.