Liverpool & Leeds-linked Ocampos addresses speculation over his future at Sevilla 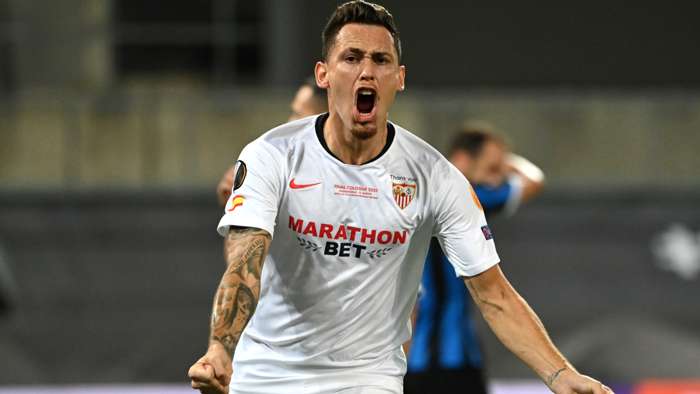 Lucas Ocampos has addressed speculation over his future at Sevilla amid links with Liverpool and Leeds United.

Ocampos has established himself as one of the most consistent performers in La Liga since joining Sevilla from Marseille in July 2019.

The 26-year-olds impressive displayshave not gone unnoticed, with it reported that two Premier League clubs are now lining up summer bids for the winger, but he has no plans to turn his back onRamon Sanchez-Pizjuan Stadium.

"I always say the same thing," hetold Canal Sur Radio: "Im focusing on the present and I dont look further ahead of the things that I cannot control.

"I love this city and what has happened in the past two years. I hope it continues.

"Im very happy here and Im not thinking of playing anywhere else than here.

"Im very grateful to the club because they gave me confidence and allowed me to grow in certain facets of my game, which other clubs had not."

Ocampos was given a five-year deal upon his arrival at Sevilla, who immediately reaped the benefits of their investment during his debut 2019-20 campaign.

The Argentine played a key role in the clubs run to a fourth-place leaguefinish and Europa League glory, scoring 17 goals in 44 games.

Ocampos hasnt been quite as prolific this term, but his performance levels have remained as high as ever as Julen Lopeteguis side have strived for more success on both domestic and European fronts.

The former Marseille star has contributed seven goals and four assists to Sevillas cause so far, and will have the chance to add to his tally when they take on La Liga leaders Atletico Madrid on Sunday.

Ocampos still has over three years to run on his Sevilla contract, which reportedly includes a €60 million (£51m/$71m) release clause.

It could be difficult for clubs like Liverpool and Leeds to stump up that kind of fee amid the financial uncertainty of the coronavirus pandemic, with it highly likely that they will have to turn to alternative targets.

Sevilla are also being tipped to tie Ocampos down to fresh terms to ward off potential suitors, and his latest comments suggest he is settled atRamon Sanchez-Pizjuan Stadium for the time being.