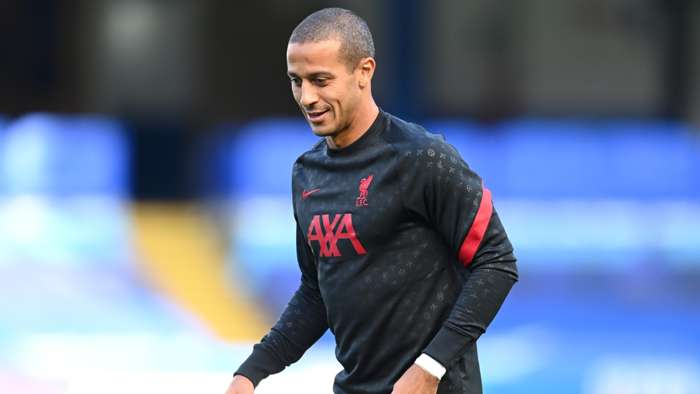 Liverpool head coach Jurgen Klopp hailed the impact of new signing Thiago Alcantara, a player he said made the "perfect start" to his Reds career in theirwin over Chelsea on Sunday.

The Spanish international was named on the bench for the game at Stamford Bridge, just two days after joiningfrom Bayern Munichin a deal which could cost the Reds up to £27 million ($35m).

Klopp decided to introduce the midfielder at half-time as the Reds looked to take advantage ofa red card fromAndreas Christensen just before the break.

The visitors did just that as a pair of Sadio Mane goals – the second aided by another error fromKepa Arrizabalaga – gave the defending champions a 2-0 win on the afternoon.

Thiago made a major impact in his debut, as he completed more passes (75) than any Chelsea player managed in the entire match.

His 75 successful passes were alsothe most by a player who played a maximum of 45 minutes since at least 2003-04.

Unsurprisingly, Klopp was delighted with the 29-year-old's first Liverpool match.

"We decided to bring Thiago on early because it was 11v10 and a player like him can command the rhythm. It was the perfect start for him and the boys helped him massively," Klopp told BBC Sport.

Speaking to Sky Sports, Klopp added:Top timing. He played with Spain and trained with Munich so he's fit, that's not a problem. He needs to get used to his team-mates, but when they went one man down it became the perfect game for him.

"I liked his game a lot. Defensively it was tricky for him, but offensively, with the ball, that's him, he wants to pass the ball."

Klopp added that he was happy overall with his side's performance, which included a saved penalty from Alisson against Chelsea midfielderJorginho.

"Super game. Really good game from both teams. I like our game a lot. Chelsea are a top side. Our own football I liked in the first half, really good situations, passed through the line but we didn't score.