'Liverpool fans will being saying yes please!' - Bayern 'have got to keep' Thiago after Champions League masterclass, says Hargreaves 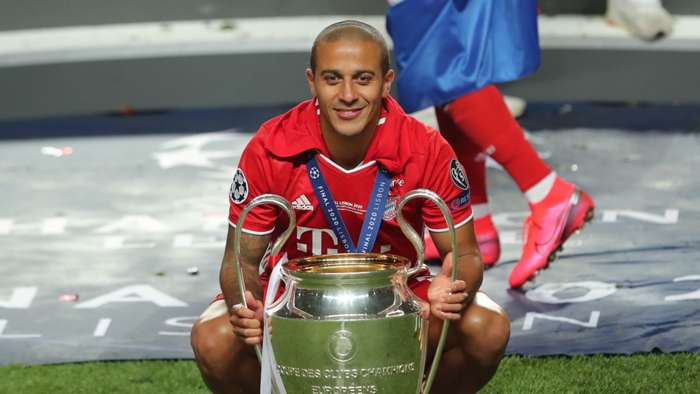 Bayern Munich "have got to keep" Thiago Alcantaraafter his Champions League final masterclass, according to Owen Hargreaves, who says "Liverpool fans will being saying yes please" to a transfer for the midfielder.

Thiago has expressed a desire to undertake a new challenge away from the Bundesliga after turning down the chance to extend his current contract at Allianz Arena.

Bayern are prepared to cash in on the 31-year-old before he becomes a free agent in 2021, but only if their €30 million (£27m/$35m) asking price is met during the summer transfer window.

Liverpool are reportedly leading the race for Thiago's signature, with speculation over his future set to increase now that the 2019-20 campaign is officially over.

The Spaniardmay have taken in his final appearance for Bayern in Sunday's Champions League final, which Hansi Flick's side won 1-0 against Paris Saint-Germain thanks to a Kingsley Coman header.

Thiago produced another stellar performance in the middle of the park to ensure that the German outfit triumphed in Lisbon, and Hargreaves thinks his old club should be doing everything possible to try and retain the playmaker's services.

"They have got to keep Thiago, he is so important and he was fantastic. Liverpool fans would have been watching that saying yes please," the ex-Bayern star told BT Sport post-match.

Hargreaves added on the difference between Bayern and PSG on Europe's biggest stage:"They have win 21 wins in a row, it wasn't the game we expected but Flick has found the big decisions at the right moments.

"Manuel Neuer and Thiago were outstanding. Bayern have more depth. If Kylian Mbappe and Neymar don't step up, who does? No one. But that is not the case at Bayern.

"He Flick has gone in and turned this team into a machine, everybody is blown away. The football has blown everyone away. He has brought everyone together."

Former Manchester United defender Rio Ferdinand also reserved praise for Flick, who stuck to his usual high-defensive line despite the threat of PSG's three-pronged attack made up of Mbappe, Neymar and Angel Di Maria

"Flick deserves huge credit, to play him, sometimes we have seen people like Pep change their tactics, but he said no, we are here because of how we played and we are not going to change our way,"said Ferdinand, who was also covering the game as a pundit for BT Sport.