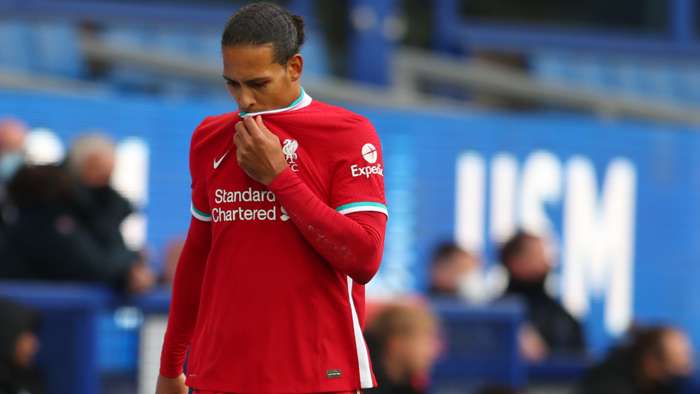 Liverpool face an anxious wait to discover the extent of Virgil van Dijk’s knee injury, amid fears the Dutchman is set for a lengthy spell on the sidelines.

He was sent for a hospital scan immediately after the game, with Liverpool’s medical staff concerned at the possibility of serious ligament damage.

Club sources insist there have been no scan results at this stage, but beIN SPORTSreported during the Manchester City-Arsenal game that Van Dijk had ruptured his anterior cruciate ligament, and could face a spell of seven to eight months out of action. Liverpool were left deeply unimpressed by that report, making their feelings known to the Qatar-based broadcaster.

Reds captain Jordan Henderson revealed that Pickford, who was not even booked for the challenge, had sought him out at the final whistle, asking him to pass on an apology to Van Dijk.

Liverpool manager Jurgen Klopp, though, was unamused at the refusal of VAR to intervene and issue the England goalkeeper a red card. Indeed, it emerged later that Liverpool had contacted the Premier League asking them to review the application of VAR in the game, having been further incensed at seeing a latewinning goal, scored by Henderson, ruled out for a questionable offside against Sadio Mane.

On the Van Dijk incident, Klopp said: “In the game, it was pretty quick. For me, it was a clear penalty what I saw and then obviously we saw that the flag went up, so offside. I still thought it's worth to have a look on the foul but that didn't happen.

“We have no power there, we just sit here and now you discuss it with me. We have to ask other people about that.

“What can I say? I don't want to say Jordan Pickford wanted to do it but it's, of course, not a challenge how a goalie can do it in the box because there's another player. If it's not offside, it's 100 per cent a penalty. So it's nothing, that's all.”

Liverpool also have concerns over the fitness of midfielder Thiago Alcantara, who was on the end of a wild challenge from Everton forward Richarlison in the closing stages of Saturday’s game.

Thiago was able to finish the game, with Richarlison, who was shown a straight red card, later tweeting an apology to the former Bayern Munich man. But afterwardsKlopp revealed the 29-year-old had complained of pain.

“When I left the pitch, Thiago told me in the red card situation with Richarlison he thinks he got injured,” Klopp said. “We will see if it’s true or not, but if he felt like this then we need to have a look.”

To lose either, of course, would be a huge blow to Liverpool’s ambitions this season. Van Dijk had, prior to Saturday, played every minute of the Reds’ last 74 Premier League matches, becoming a totemic presence since his £75 million move from Southampton in January 2018.

Without him, Liverpool would have to rely on Joe Gomez and Joel Matip as their only specialist senior centre-backs. Matip himself only returned from a hamstring problem against Everton, emerging unscathed after his first 90-minute outing in almost a year, while Gomez too has a history of injury issues and has not been at his best so far this season.

Fabinho is another option, though the Brazilian’s importance in midfield is significant too, especially if Thiago were to miss any period of time. Liverpool also have Nat Phillips, the 23-year-old who spent last season on loan with Stuttgart in 2.Bundesliga, and teenagers Rhys Williams, Sepp van den Berg and Billy Koumetio as emergency options.