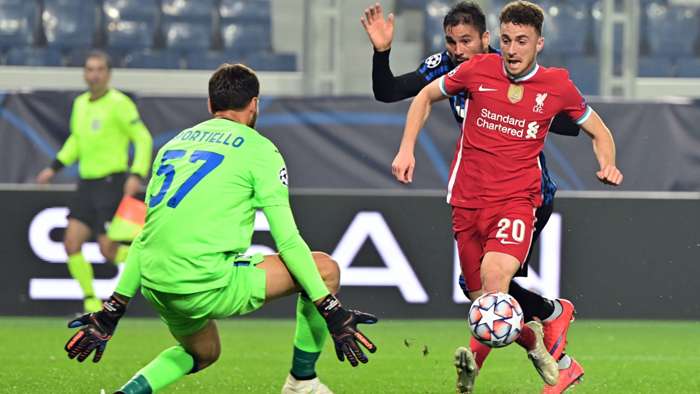 Liverpool star Diogo Jota attempted to brush off the plaudits after netting a sensational hat-trick in the5-0 win over Atalanta on Tuesday.

The win was Liverpool's third in a rowin the Champions League group stages and was also thebiggest ever win by an English club away to Italian opposition in European competition.

When asked if he was playing the best football in his career, the£45 million ($57m) summer signing from Wolves attempted to shift the focus to his team-mates.

“I'm playing in the best team in my career so far," Jota replied to BT Sport."I don't know if it was my best moment but scoring goals is my way of playing football. It is great to win away in the Champions League."

Asked about playing alongside Mohamed Salah and Sadio Mane, who both also scored on Tuesday, Jota replied:“Two world-class players, we all know their quality so it makes it easier for me to do my job and I think we did a great game today."

Jota was also asked about his favourite of the three goals, replying: “The first one just because it unlocks the game. For any team it is important to get the first one. We scored soon in the game so it was a good moment for me and it meant as a team we could manage the game."

Liverpool will now turn their attention toward the Premier League as they face a massive showdown against Manchester City on Sunday.The Reds finished a point behind title-winners City in the 2018-19 campaign before they rebounded last season to finish top ofthe league table by 18 points ahead of Pep Guardiola's side.

Though Liverpool produced an offensive explosion against Atalanta, Jota is more focused on what his side need to do on the defensive side of the ball against City.