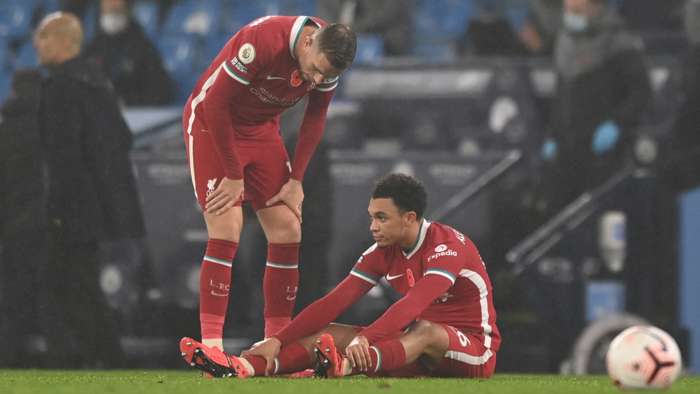 Liverpool's defensive crisis worsened on Sunday when right-back Trent Alexander-Arnold was taken off in the second half of the Premier League match against Manchester City.

The 22-year-old is the latest member of the Reds' back line to pick up an injury, with centre-back Virgil van Dijk already ruled out for several months with knee ligament damage. Meanwhile, stand-in defender Fabinho also missing with a hamstring problem he picked up in his side's Champions League win against Midftjylland.

Jurgen Klopp's side welcomed Joel Matip back into the heart of the defence for Sunday's trip to the Etihad Stadium, partnering Joe Gomez.

Milner made his 750th competitive appearance and his 550th in the Premier League when he took Alexander-Arnold's place.

Liverpool headed into the game looking to return to the top of the table with a win, while last year's runners-up City are looking to seal a second consecutive league win for the first time this season. The hosts have had an inconsistent start to the campaign, having collected 11 points from their first six matches, leaving them in 12th place and seven points adrift of Leicester, who climbed to the top with a 1-0 win against Wolves earlier on Sunday.