Liverpool-linked Thiago will be a huge loss, says Hitzfeld, but ex-Bayern boss hopes Flick can persuade Alaba to stay 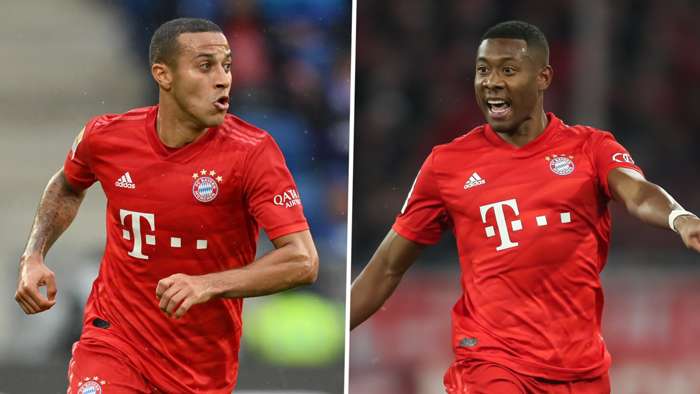 Ottmar Hitzfeld has admitted that Liverpool-linked midfielder Thiago Alcantara will be a huge loss for his old club, but the former Bayern Munich coach is still hoping that Hansi Flick can persuade David Alaba to stay put.

The former's appearance in the showpiece is expected to be his last for Bayern, as he gears up to undertake a new challenge away from Germany.

Bayern CEO Karl-Heinz Rummenigge has confirmed that Thiago is seeking a move after rejecting the chance to extend his contract, and Anfield has been mooted as the most likely next destination for the Spanish midfielder.

The German champions are reportedly willing to sanction the 31-year-old's departure if their €30 million (£27m/$35m) valuation is met, and although the club have yet to receive any formal offers,Hitzfeld is resigned to seeing a prized asset walk through the Allianz Arena exits.

Asked how much Flick's squad will be weakened if Thiago leaves in the coming weeks, Hitzfeldtold Goal and SPOX:"That is, of course, a loss for Bayern.

"After not always being able to call upon his full repertoire of skills at the beginning of the season, he has developed and improved a lot, like the entire team."

Alaba's future at Bayern is also very much up in the air, with the Austrian defender currently being linked with a number of top clubs across Europe, including Real Madrid and Chelsea.

The 28-year-old only has one year left to run on his current contract, and is reportedly open to a transfer after spending his entire career to date in the Bundesliga.

Hitzfeld concedes Alaba's sale would make sense financially, but he would still like to see Flick convince a versatile performer to extend his stayat Bayern.

"Of course, he's one of the pillars of the team and has been playing outstandingly for months.It was an excellent decision for Hansi Flick to move Alaba into central defence," said the 71-year-old.

"Whether he stays or not is certainly also a financial question.On the other hand, I think he knows how much he appreciates Bayern."

Hitzfeld went on to praise Flick for the impact he has had since replacing Niko Kovac in the Bayern hot seat, and has backed the German to usher in a new era of dominance.

"He worked hard and achieved something sensational in the new position as head coach.Hansi Flick took this opportunity and is the father of the success," he said.

"In addition to his sporting competence, he is primarily characterised by his human qualities, because he is an absolute team player and has an open ear for all employees.

Hitzfeld also expressed his belief that Thomas Muller was the standout player for Bayern last season, highlighting his contribution as a leader on and off the pitch.

He added: "Thomas Muller rose like a phoenix from the ashes and is one of the most important drivers of the team.

"He has the Bayern gene and is someone who takes on the mantle in the dressing room and on the pitch.