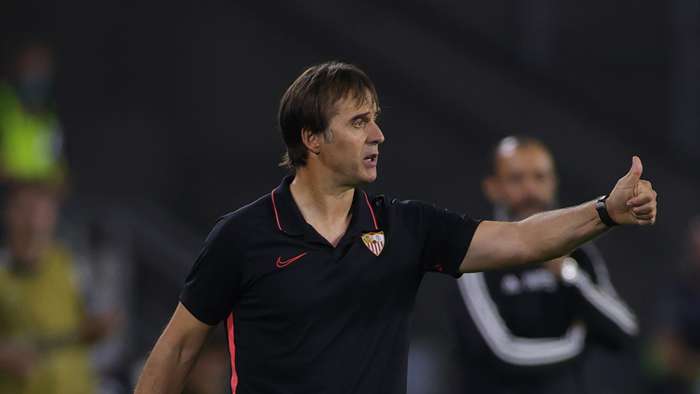 Julen Lopetegui says Manchester United are "the biggest team in the world" but is confident Sevilla will come out on top in Sunday's Europa League semi-final tie.

United beat Copenhagen 1-0 after extra-time on Tuesday and now await Lopetegui's men, who are seeking a record-extending fourth triumph in the competition since its rebranding in 2009.

"We are going to play against Manchester United in the next match - they're the biggest team in the world but we're going to be prepared for them," Lopetegui told reporters.

"We're focused on the next game, against a top, historic side, one of the best in the history of the sport who are in great form.

"We will give our best as we always do. To play against them will be really tough, but we'll go into it believing we can beat them."

Sevilla had 76 per cent of the ball against Wolves but created only a couple of chances before Ocampos popped up late on with his 17th goal of the season.

Lopetegui insists his side were good value for the win and is after a similar type of performance against in-form United next weekend.

"I think we deserved the win today. The key was to chip, chip, chip away, have patience and wait until the right moment," he said.

"I am very proud of my players because we were against a very good team. We needed to have the ball and not make mistakes because they have very fast forwards.

"We played very well against a good team. We had to be very concentrated."

Defeat for Wolves brings an end a gruelling 2019-20 campaign that started 13 months ago and saw them play 17 games in Europe.

Boss Nuno Espirito Santo is proud of his players' efforts and already has one eye on next season, which begins in a little over four weeks' time.

"There is a sense of frustration," he told BT Sport. "The last minute goal is something that's happened to us too many times, but I'm proud of the boys.

"We played a tough team but it's all about small margins. We came this far, now it's over – let's rest and look to the future.

"There are players out there who gave everything. Of course the legs and the brain don't work so good.

"We must be proud of ourselves and admit we made some mistakes this season which we need to rectify to compete at a higher level.

"It was a long journey. We wanted to go as far as we could - we had it very close today and everyone's disappointed but we should not ignore the players' efforts.