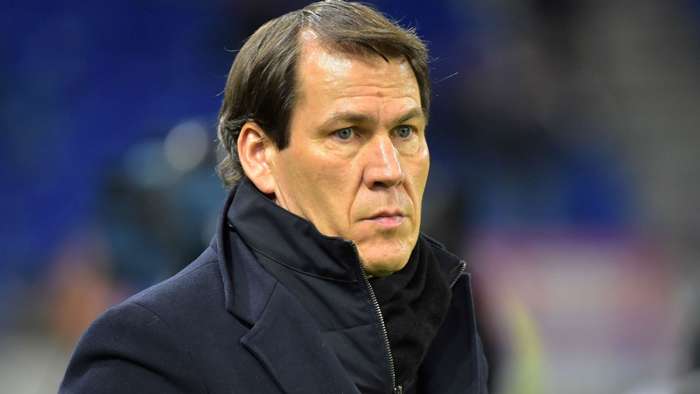 Maxwel Cornet opened the scoring in the first half as City appeared uneasy with Guardiola's altered set-up and starting XI, choosing to go with a back three.

Kevin De Bruyne levelled deep into the second period, but howlers from Ederson led to Moussa Dembele netting twice in the closing stages to secure a famous win for Lyon.

It takes them to the Champions League semi-finals for the first time in 10 years and Aulas believes the achievement vindicates the decision to appoint Garcia in October after a shambolic start to the season under Sylvinho.

"It's a huge achievement, well done to Rudi, Juninho Pernambucano, sporting director and to the players who were magnificent," an emotional Aulas told RMC Sport . "We had a terrible year, we started badly, we changed coaches, we had terrible injuries. We were able to recruit and react strongly.

"We have a talented team. You have to have a bit of success beyond talent, we've had some, that's why we have to remain humble. It's a very great performance.

"Garcia is a boy who does his job well. We had identified him to straighten out OL. He knew with humility, and sometimes difficulties, to do his work.

"It is the evolution towards what we have wished. Juninho knew how to support him in difficult times. It is a confirmation for me, he deserves the recognition."

Bayern Munich await in the semis, as they did a decade ago, and Aulas applauded his players for what he feels is a response to perceived injustice with the early end of Ligue 1, which left Lyon finishing the season seventh and requiring to win the Champions League just to qualify for Europe again.

"It's wonderful," Aulas said. "We have a group that has been able to transcend itself, to come together. As we have good players and only the psychological side was missing, we see that this competition comes at the right time.

"We are living fantastic moments, I'm very happy. It's great to have been able to string together a qualification against Juve and then against City.

"We know they Juve and City are fantastic powers. We feel that normally this team City should have progressed, it's a feat and a kind of resonance compared to everything we have been through in recent months.