Man City 2.0 - Can Guardiola build another title-winning team at the same club? 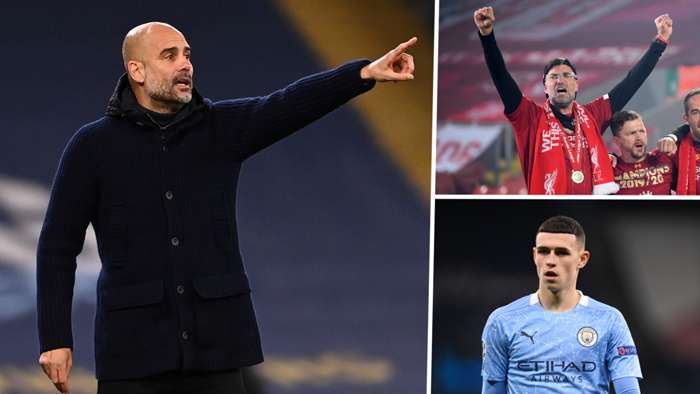 "The future of this club is absolutely guaranteed with him and the players we have," Manchester City's director of football Txiki Begiristain enthused after Pep Guardiola's two-year contract extension was announced on Thursday.

To pull it off, they had to convince the former midfielder to do something that he has not done before– re-build his own title-winning side.

Guardiola then took a season off before returning to coaching in 2013 with Bayern Munich. He never failed to top the Bundesliga during his three-year stay at the Allianz Arena.

Of course, he has since added two Premier Leagues to his impressive trophy list, thanks to a couple of record-breaking campaigns.

However, after failing to seriously challenge Liverpool for the title last season, he must now prove that he can start a new cycle of success at the same club, just as Premier League greatsSir Alex Ferguson and Arsene Wenger did before him, at Manchester United and Arsenal, respectively.

A strong relationship with City chairman Khaldoon Al Mubarak was believed to be integral to Guardiola's decision to extend his stay in Manchester and it is believed that the former Barca midfielder has been given assurances that his squad will be further rejuvenated in the coming transfer windows.

Unsurprisingly, the confirmation of Guardiola's new contract instantly increased speculation that a frustrated Lionel Messi will leave Camp Nou to join his former boss at the Etihad Stadium at the end of the season.

While Guardiola has once again publicly reiterated his desire to see the Argentine to finish his career in Catalunya, should Messi carry through with his threat to quit the club when his own contract expires next summer, City will certainly be among the clubs at the front of the queue to sign the six-time Ballon d'Or winner.

However, there are other issues that need addressing first.

Sergio Aguero and Fernandinho are both out of contract at the end of the season and, while there is a possibility of them agreeing short-term extensions, replacing two club legends will now almost certainly become Guardiola's responsibility.

Another player out of contract in June is Spain international Eric Garcia, who has made clear his intention to leave the club when his contract expires amid intense interest from Barcelona.

Guardiola hopes he can still change the teenager's mind, though, and while the centre-half is still expected to depart, if anyone can get him to stay, it is the City boss.

John Stones, Benjamin Mendy and Oleksandr Zinchenko also face uncertain futures, given all three have failed to become regulars over the past three seasons.

“We already have an unbelievable squad, we have a lot of top players but the life of the squad is already changing,” Begiristain said. “There are some players asking to leave, there are other players that want to come.

“There are players that think they want to play more than the other ones, so this is the natural life of a squad. So, what is very, very good for the club, and for my job, is having Pep here. It makes it all quite easy.

“It’s quite easy to convince the players to come because we have to recognise as well that Pep makes the players better, so they can see an improvement and that is obvious and that helps to sign players for Man City.”

Ferran Torres was one of those transfer targets that chose City because of Guardiola.

The 20-year-old, who has already made a major impact in England, was courted by several top clubs but ultimately felt he couldn't pass up the chance to work with Guardiola.

Consequently, the in-form winger will be thrilled that a coach renowned for improving young players has decided to commit his future to the club.

Phil Foden will be just as enthused, given his burgeoning career has been carefully nurtured by Guardiola, who represents the perfect mentor to turn the talented 20-year-old into one of Europe’s most exciting and creative players.

City’s Academy is also bursting with promising talent and youngsters such as Cole Palmer, Taylor Harwood-Bellis, Tommy Doyle and Liam Delap will all get a fair crack at showing they deserve a place in the first-team squad.

“Khaldoon never asked me anything in terms of titles and what we have to do – just be yourself, and do what you have done since the academy with Barcelona, and after Barcelona first team then Bayern Munich and now here,” Guardiola said of the project.

“He said the same – continue what you started, we believe we can do it again and this was the reason why.

“He knows and understands completely the business – that as much as you can do maybe it doesn’t work. He knows perfectly how difficult everything is in this world, especially right now for all the clubs and we’re not an exception.”

The immediate focus will be on moving up the Premier League table, with City currently 10th after Guardiola’s worst ever start to a season as a coach.

Tottenham away and a renewal of hostilities with his old nemesis Jose Mourinho is not an easy way to begin a new era on Saturday, and from now until the New Year, City face two matches a week and a gruelling schedule that will test the depth and strength of his squad.

However, despite winning fewer than half of their matches this season, City are positive about the way they have started the campaign.

Guardiola’s squad were hit by a number of niggling injuries in the opening weeks, as well as Covid-19, while many of his players were underprepared after starting the season just a fortnight after their summer break.

City are only six points off leaders Leicester, having played a game fewer, and have won their opening three Champions League fixtures.

Defensively, the centre-back pairing of Aymeric Laporte and Ruben Dias coupled with the emergence of Joao Cancelo at left-back, have added some much-needed solidity, while the rest of the squad is starting to return to something like full strength.