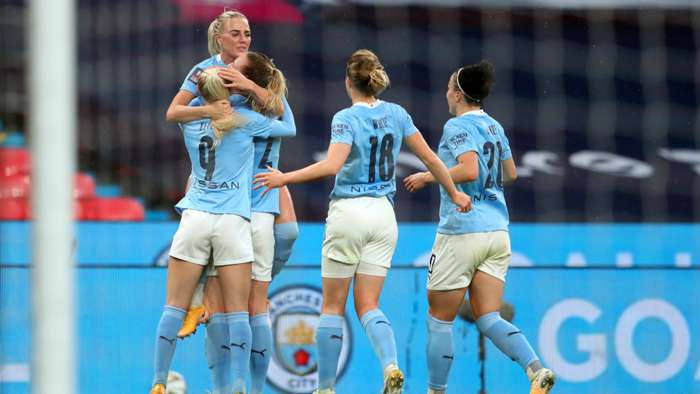 Manchester City head coach Gareth Taylor has challenged his team to make a unique piece of history by winning two FA Cup titles in one season.

The Citizens defended their crown on Sunday with a 3-1 win over Everton in extra time, winning the competition that carried over from the 2019-20 season into the new campaign, having been initially suspended because of the Covid-19 pandemic.

It was the club's third FA Cup win andTaylor's first trophy since taking charge of the team back in May. Now, he is hungry for more, especially with a special achievement possible this year.

"It means everything," Taylor said after the game. "I'm fresh to this. I was just talking before saying that, I've not even hit double figures yet for games under my belt.I think it's amazing.

"We want to achieve big things. We want to make history. We'll challenge the players to probably do what no other club is likely to ever do again and win the FA Cup twice in one season. It'll be tough. I know it will be because everyone wants to win.

"I just have a mixture of emotions at the minute. I don't think it's quite sunk in because of the game and how it evolved. But I'm really, really proud at this moment."

The scores were level at 1-1 after 90 minutes, with a header by City midfielder Sam Mewis cancelled out by Everton striker Valerie Gauvin.

Then, in extra time, substitutes Jess Park - who only turned 19 a few weeks ago - and Georgia Stanway linked up to give Taylor's side the lead, before Janine Beckie made sure with the last kick of the game.

It was another huge moment forPark, who was handed her first Women's Super League start last month in a huge clash with reigning champions Chelsea. It was alsoanother sign of the trust Taylor - who was City's Under-18s head coach before this job - is willing to put in young players.

"She's an exciting player. I mean, how can you not get excited about Jess when she's on the ball?" the Man City head coach added.

"She's learning. The good thing is she's having to really fight for minutes, which is great, alongsideother players, other really, really good players that we have in the squad.

"When we go into these periods with a high volume of games, we're going to need everyone, so everyone will get their opportunity. But I think having some real experience around those young players is only going to help them grow. For her to put in a performance like that was beyond her years.