'Man City still have all to play for' - Title race not over & Champions League still a "massive target", says Kompany 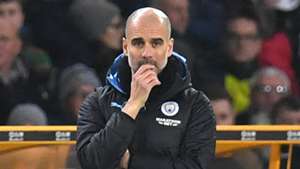 Manchester City still have "so many things to look forward to" this season, according to Vincent Kompany, who believes the reigning Premier League champions are not out of the race for a third successive title just yet.

Pep Guardiola's side are trailing Liverpool by 14 points in the top flight at the moment, having played a game more than their rivals.

City haven't been able to match the consistency of previous years, with five defeats on their record already from 22 fixtures, including a 3-1 loss at Anfield back in November.

A 6-1 win away at Aston Villa on Sunday saw them leapfrog Leicester into second place, but many have already written off their chances of landing another league crown come May.

City are, however, on the verge of a third consecutive Carabao Cup final appearance, having beaten Manchester United 3-1 at Old Trafford in the first leg of their semi-final tie.

Progress has also been made in the FA Cup and Champions League, with a unique treble still on the cards if Guardiola can keep his squad motivated.

Ex-club captain Kompany, who won 12 major honours while at the Etihad Stadium, insists City still have "all to play for" across all competitions and shouldn't be disheartened by how their 2019-20 campaign has gone so far.

"I never say it's [the Premier League title race] over with City. It's impossible to say. But it is not in the hands of Manchester City and that's unfortunate but there is so many things to look forward to," Kompany said at a Football Writers' Association tribute night held in his honour.

"Look at historically how City have been performing in cups and how the Champions League is still a massive target for the club.

"There is no reason to be disappointed about this season, there's still all to play for."

The Belgian defender, who returned to Anderlecht as a player-coach last summer, went on to express his belief that Guardiola does not need to make wholesale changes to his squad in a bid to close the gap on Liverpool.

"When you have such a manager of the status of Pep Guardiola. It is a matter of cycles. Players left and players came in, it takes time," Kompany added.

"Even if you had a machine for two years, it's just cycles more than big changes or big signs to why they haven't kept up with Liverpool. We just need a new cycle."

City are due back in Premier League action on Saturday, with Crystal Palace set to arrive at the Etihad.