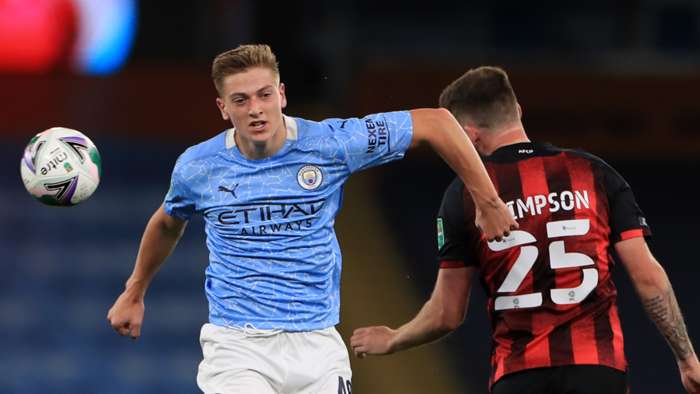 Liam Delap will never forget his first goal for Manchester City, even if there was hardly anybody there to see it.

His father, ex-Stoke and Derby midfielder Rory, was in the stand to watch his son’s impressive debut. The former throw-in expert was one of the few allowed into the Etihad Stadium - working on the night as scout for the Potters, and he admitted to feeling sick with nerves before the game.

He needn’t have worried - Delap looked more than at home in the first team.

The England under-17 international hustled and battled all night, making run after run until the very last whistle with the sort of commitment that Guardiola loves.

It was a brilliant impact to show that he has the ability to be a serious alternative for the City boss in a shortened season when all squads are set to be stretched.

City only have Sergio Aguero, still recovering from a knee injury, and Gabriel Jesus as recognised strikers, although others are able to fill the role.

But both are sleight predators - quick on their feet and lightning with their finishes. Delap offers a physicality, which may just give Guardiola another option.

There were games last season when opponents' master plans were to sit deep and forceCity wide to send over cross after cross into a packed box. It worked perfectly for Arsenal in the FA Cup semi-final and Southampton in the Premier League in matches after lockdown when City failed to score.

Delap has already made a meteoric rise into Guardiola’s thoughts, only joining up with first-team training midway through the summer. But he showed he can mix it with senior players during a 3-1 Football League Trophy victory over Mansfield earlier this month when he scored twice and laid on the other.

With the City boss already missing seven players in their Premier League opener against Wolves, he decided to protect the majority of the ones that are fit, despite chasing Carabao Cup success for a fourth successive year.

His team had an average age of 21 years and eight months, which dropped to just 20 if 30-year-old Kyle Walker and Riyad Mahrez, 29, were taken out.

Foden, at just 20, must now come into the veteran category these days as he made his 76th appearance for the club and was City’s creative force in the middle of the pitch.

With David Silva leaving the club in the summer, he is ready to step up as his heir and the Spanish playmaker would have been delighted with his clever pass that dissected the Cherries defence for the opener.

A youthful defence could only hold the lead for four minutes before Sam Surridge levelled after a soaring run from City graduate David Brookes.

City, as ever, controlled the majority of possession with summer signing Ferran Torres and Mahrez, returning from self-isolation after a positive Covid-19 test, causing Bournemouth problems.

But Guardiola finally called for the experience of Kevin De Bruyne and Raheem Sterling from the bench to get the job done.

Foden finally got the winner when he turned in a rebound after Mahrez’s shot from the edge of the box came back off the post.