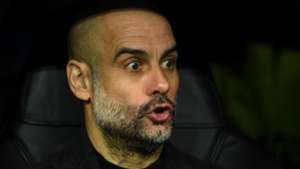 Manchester City have been warned as to when Pep Guardiola will start to consider a move elsewhere and "look for other things", with Domenec Torrent saying full player support is vital to the Catalan coach.

The former Barcelona and Bayern Munich boss has never stuck around too long in any given post and is approaching the end of his fourth season at the Etihad Stadium.

Guardiola's contract is due to keep him in England for at least one more year, but questions have been asked of his future as no extension has been put in place.

City have also been stung with a two-year ban from European competition - although they have appealed that ruling - and competition for major honours continues from a team that secured an historic domestic treble in 2019.

Guardiola is at his best when everybody around him is pulling in the same direction. That remains the case at present, but Torrent says the 49-year-old may have his head to be turned if he feels as though those at his disposal are no longer fully committed to his vision.

Guardiola's former assistant, who is now manager at New York City FC, told The Athletic: "There are players, I'm telling you, that maybe after three years, they have had enough. They want to relax, earn money at another club with fewer demands - but I think the best players, the true champions, they never get tired of winning and learning.

"For me, the best way to avoid these problems is to change two or three players every year; that's the easiest way for a manager.

"The key for me is that if you see that the player is not happy, then you have to move them on, no matter who it is. You sense this. As a coach, you notice when the player is getting tired of the message. If it's harder and harder to get your message across or it's getting repetitive, that's when you consider bringing things to an end."

Torrent added on Guardiola, who has remained coy when it comes to the signing of fresh terms in Manchester: "If you want to stay and the club believes in you, you could change six or seven players but if you see things that you don't like and that you can't change, then you have to leave.

"I think Pep is very intelligent and when he sees that his message isn't getting across, then for sure it will be time to look for other things."

City have surrendered their Premier League crown this season, as Liverpool stand on the brink of wrapping up that piece of silverware, but a third successive Carabao Cup win has been earned and they remain in the hunt for FA Cup and Champions League honours.