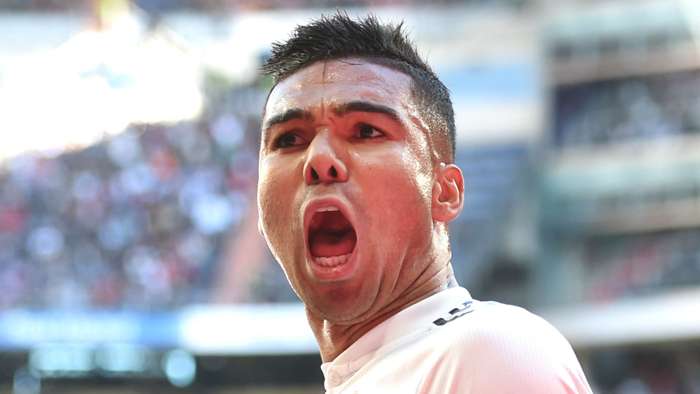 Gabriel Jesus and Kevin De Bruyne condemned Madrid -who had captain Sergio Ramos sent off in the Spanish capital -to defeat at the Santiago Bernabeu in February.

Madrid have a mountain to climb in Manchester, but star Casemiro believes Zinedine Zidane's side can benefit from playing without fans on the road.

"Without fans it's a different game,"Brazil international Casemirotold Esporte Interactivo.

"It will be a very good game and difficult for both sides, but we'reReal Madridand we know we have a chance to go through.

"They won't have their fans and that might favour us a little.

"But the players are the same, the coach is the same and we all know that the difficulty level will be the same because they're a great team."

Casemiro's team-mate Raphael Varane explained the Los Blancos' drive to overcome the deficit against City and the team will be ready to put their best foot forward.

"We haven't had games to play beforehand, so we have time to prepare ourselves. The best team on the day will win. We'll go into the game with hunger to win and the necessary determination."

Varane added on the likelihood of another fiercely competitive contest between two elite teams:"It will be a difficult game against a very good team.The first leg was a top-quality game, with pressing from both teams. "It was decided by the small details.

"Real Madrid and City are two teams that like to have the ball, are very intense and that require lots of concentration.

"These are the best games in the Champions League - the ones that are decided by very little. They are why we love this competition."

Madrid won three European Cups in a row during Zidane's first spell in charge, and Varane says that experience holds them in good stead to avoid an early exit this time around.

"We know what we've achieved in recent years is something exceptional," he continued. "What we have to do is carry this experience with us and know that the small details make the difference in big games.