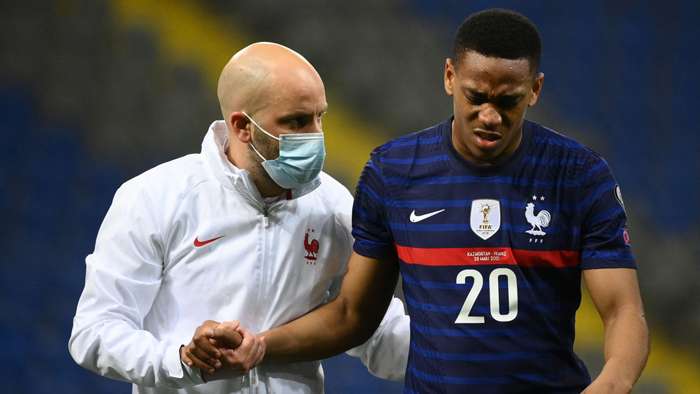 Didier Deschamps has delivered an update on Anthony Martials injury ahead of Frances clash with Bosnia-Herzegovina.

The Manchester United forward was forced off the pitch with a knee issue during Les Bleus 2-0 victory over Kazakhstanlast weekend.

Martial may be unavailable for Frances final World Cup qualifier of the international break but Deschamps is adamant that the problemisnt "anything serious", which will come as a relief to Manchester United.

“Anthony has a small issue on his knee. Nothing is decided yet [as to whether he can face Bosnia-Herzegovina],” The Francehead coach said ata pre-match press conference.

“He won’t be taking part in the training session a bit later. We’ll see tomorrow (Wednesday). Anything serious has been dismissed.

“We’ve run some tests, but there’s still the pain, and having travelled as long as we have, that hasn’t helped.”

If Martial does sit out Wednesdays fixture against Bosnia-Herzegovina, it remains to be seen whether the Frenchman will then be unavailable for the resumption of the Premier League.

The Red Devils welcome Brighton to Old Trafford on Sunday as they continue to attempt to keep pace with Manchester City at the top of thetable, and they cannot afford any slip-ups with Leicester City and Chelsea breathing down their necks.

However,with Deschamps admitting Martials injury isnt anything too serious, there is every chance the forward will be available to face Brighton, with theirEuropa Leaguequarter-final against Granada following four days after.

Martial hit a career-high 23 goals across all competitions last season for United, and he was expected to build on that platform and nail down the No.9 role in Ole Gunnar Solskjaers starting XI.

The Frenchman has, however, been unable to reach the same high standards this term, with his position coming under threat from veteran frontman Edinson Cavani.

Martialhas seven goals to his name from 36 appearances in all competitionsso far this season, with four of them coming in the Premier League.

Haaland always had personality to reach the top - Solskjaer