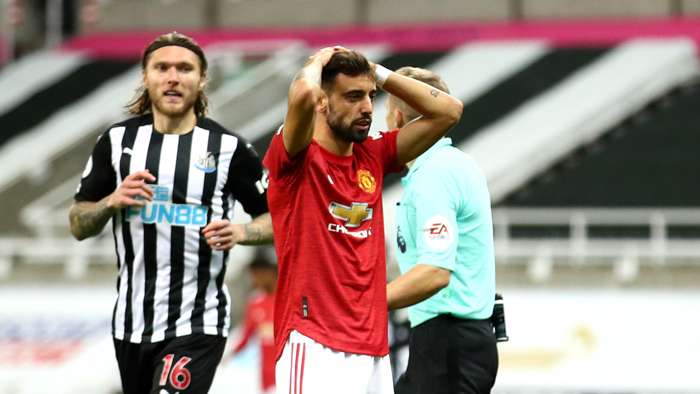 Fernandes had previously converted all 10 of his spot-kicks in the Premier League and has taken six more penalties than any other player in the competition since his arrival from Sporting earlier this year.

Speaking after the match, Fernandes admitted he did adopt a new approach for his spot-kick and is ready for rivalfans to point out his perfect record from the spot is no more.

"I already change sometimes. Today it doesn't work," he told BBC's Match of the Day.

"I want to put the ball more in the corner but it was not good enough. Congratulations to him on being thefirst to save a penalty in the Premier League from me. That's 11 taken and one missed. Now people can say I can miss a penalty.

"I need to do what is better for the game, today was not the right choice but it doesn't matter. I missed the penaltyand I have to keep improving in the next games."

Despite conceding three late goals, Darlow had proved decisive for Newcastle with the shot-stopper making a number of saves across the 90 minutes.

Newcastle manager Steve Bruce felt the final score wasn't a fair reflection of the game and revealed Darlow is now under an injury cloud after a heavy collision.

"The disappointment is that we were naive towards the end. We had a big chance andDavid De Gea pulls off a wonder save. I know Karl has made some terrific saves but it might've been different," Bruce said post-match.

"We left wide open spaces andif you do that it becomes very difficult.