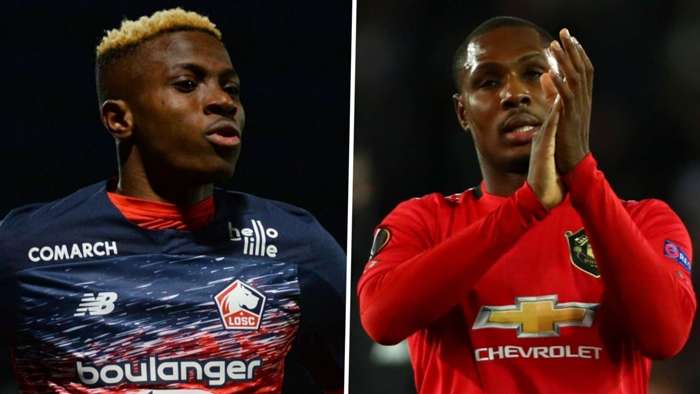 Manchester United wanted to sign Victor Osimhen earlier this summer but he didn't want to compete with Odion Ighalo, the Napoli star's brother has claimed.

Osimhen quickly established himself as one of the most deadly strikers in Ligue 1 after joining Lille from Charleroi in the summer of 2019.

The 21-year-old hit 18 goals in his first 38 appearances forChristophe Galtier's side, helping them finish fourth in the French top-flight and make a mark in the Champions League group stages.

He impressed enough to attract attention from some of the biggest clubs on the continent, including Arsenal and Liverpool, with Napoli eventually winning the race for his signature after striking a €50 million (£46m/$59m) deal with Lille on July 31.

United were alsoheavily linked with Osimhen before he made his way to Italy, and his brother has now confirmed thatthe talented young forward was contacted over a possible move to Old Trafford.

However,AndrewOsimhen says the Nigeria international ruled out the possibility of joining Ole Gunnar Solskjaer's ranks due to the presence of fellow countryman Ighalo, who arrived at the club on loan from Shanghai Shenhua in January.

“It is very true that Manchester United wanted Victor but he told me something like he had too much respect for Odion Ighalo to be competing for shirts with his senior colleague,” Osimhen's older brother told Complete Sports.

“My brother holds Ighalo in high esteem and he just didn’t see himself going to Old Trafford to battle for a striking role with the highest goal-scorer at the 2019 AFCON in Egypt.”

Osimhen scoredthree goals in eight minuteson his debut for Napoli in a comprehensive 11-0 pre-season friendly win over L’Aquila last month, but head coach Gennaro Gattuso warned supporters to be patient with their newest signing in hispost-match interview.

“It’s too easy to get excited now, we’ve got to give him time and let him work, not put pressure on," said Gattuso.

“He is an important player and we paid a lot for him, but there were no doubts he would give us something different that we haven’t had in my time here. There’s a long way to go.”

Osimhen's first competitiveouting for Napoli could come when they open their latest Serie A campaign away atParma on September 20.