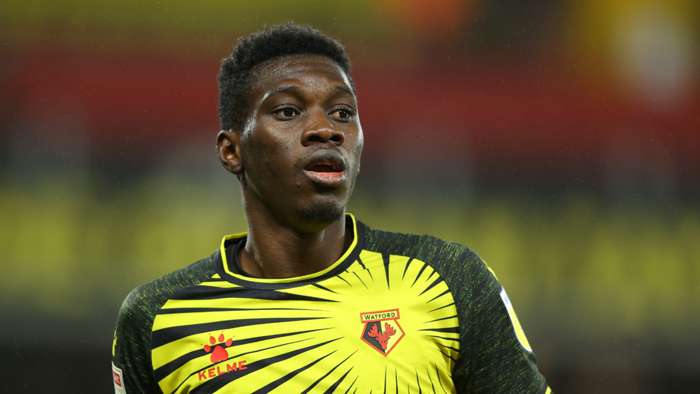 The Senegal international suffered relegation out of the Premier League last season, but offered enough during his time in the English top flight to attract admiring glances from heavyweight outfits.

Liverpool were another of his suitors, as they considered pairing the 23-year-old with his fellow countryman Sadio Mane at Anfield, but United came closest to pulling off a deal.

Giraldi has told the Here We Go podcast of the interest shown in Sarr from Old Trafford: “We were extremely close, I was personally negotiating with them.

“We werent able to reach an agreement. And I think Ismaila is very young, he will arrive for sure.

“He missed probably an opportunity, but I think also for his football to stay here and get 10 goals and 10 assists, hes deciding the league.

“I think for Watford in the condition they are at the moment its lucky he stayed.

“I love Ismaila because he has the ability to affect the game every time he plays, and thats quite rare.

“I remember last year against Manchester United and Liverpool, he was the one with Gerard Deulofeu on the other side affecting the game and deciding the game every time.

“This type of player are players you have to try to maximise and protect them as much as you can.”

He hit six goals during his debut campaign, including memorable efforts in the first defeat inflicted on Liverpool as Jurgen Klopp’s side surged towards a Premier League title triumph.

Sarr showed that he could cut it among English football’s elite, but now finds himself turning out in the second tier.

Nine goals and four assists have been recorded this season, with that contribution helping Watford to position themselves among the Championship promotion hopefuls.