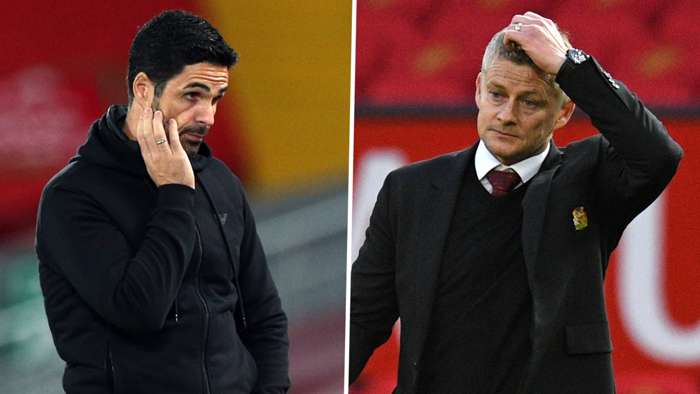 Manchester United would be title contenders under Mikel Arteta, according to Arsenal legend Ian Wright, who says Ole Gunnar Solskjaer is underachieving at Old Trafford.

A Pierre-Emerick Aubameyang penalty was enough to give the Gunners a 1-0 victory, condemning United to their worst start to a home league season since 1972-73.

The result also heaped more pressure on Solskjaer, with the Norwegian seemingly no closer to ending the Red Devils' wait for another title success than he was when he was handed a permanent three-year contract in March 2019.

In stark contrast, Arteta has turned Arsenal into a formidable force again over the space of just 11 months, giving the team a clear identity while also delivering silverware in the form of theFA Cup.

Wright thinks that United would be in a far better position if the Spaniard was sitting in the Old Trafford dugout instead of Solskjaer, who he believes is failing to get the best out of a squad brimming with talented players.

"Can I just say something, I'm just going to blast it in: If Arteta is managing Man United they are challenging," the former Arsenal striker said on hisWrighty's House podcast.

"Because, for me now I've got to the point where, when you look at the inconsistency of Man United with the components they have, the team that they have, what they should be doing.

"We're talking about Paul Pogba here, World Cup winner, you've got Axel Tuanzebe who can't even get on the pitch after marking arguably two of the most exciting and brilliant players in the world.

"He's using two holding midfielders when if he's playing Tuanzebe he doesn't need that! And you've got a manager who, for me, is playing off of vibes, he's managing off of pure vibes.

"And looking at Ole Gunnar Solskjaer, who's got a Man United team with this Alex Telles – I think Telles looks like someone who could do something.