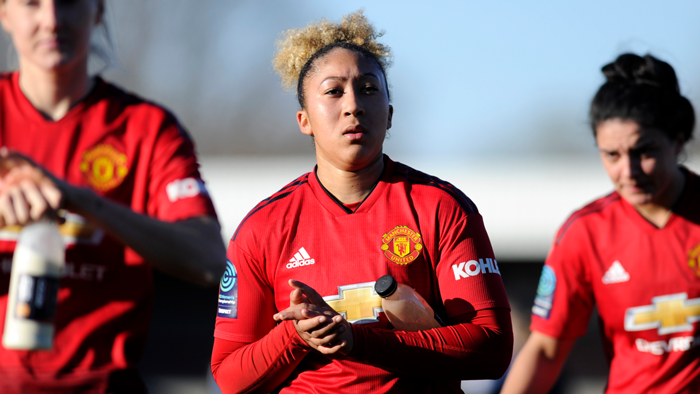 Manchester United youngster Lauren James has been handed a first call-up to the England women's squad.

England were originally due to take in a friendly clash against Norway on December 1, but two in-house training matches have been scheduled instead following the cancellation of that fixture.

The players will reconvene at St George's Park on Sunday to begin a 10-day training camp, withJames set to stepup to the international stage for the first time, albeit in a non-competitive capacity.

The 19-year-old has been a bright spark in United's team since joining the club from Arsenal in 2018, and her hard work has caught the eye as England start to look ahead to the UEFA Women’s EURO in 2022 and FIFA Women’sWorld Cup in 2023.

The other notable inclusion in the squad isManchester City’s Laura Coombs, who has not played for the Lionesses since 2015.

Elsewhere, Liverpool star Rinsola Babajideand Arsenal's Lotte Wubben-Moy have been called up for the second time, but there is no place for Chelsea defender Millie Bright, despite her impressive start to the 2020-21 season at club level.

Manchester City midfielder Jill Scott has made the cut once again, butthe cancellation of the clash with Norway means she will have to wait until next year before picking up her 150th cap for England.

Neville explained his selection choices, saying: “This has been a challenging time for everyone, but it will be good to finish the year with an intensive training camp during which the squad will develop further and in which every player has the chance to prove themselves ahead of our upcoming major tournaments.

“I’m delighted to give Lauren James her first senior call-up. She is an exciting young player that we want to help develop further. She joins the squad alongside many other young players who we’ve introduced over the last few months.

“Laura Coombs is a player I have watched a lot this season and I have been very impressed with her progression in the game. She has performed consistently at a high level which merits her call-up to the squad.

“This camp will give us another excellent opportunity to integrate young promising players with our experienced internationals and align everyone on the team’s long-term vision."