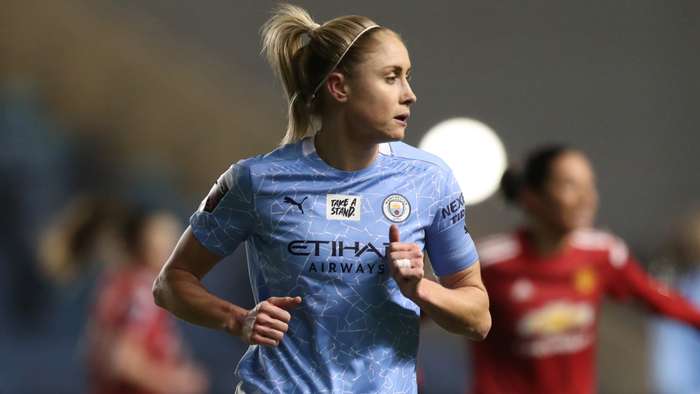 The centre-back has an Achilles problem that has forced her to miss City’s last two games – a win over Bristol City in the Women’s Super League and a victory in the second leg of their UWCL last 16 tie with Fiorentina.

Head coach Gareth Taylor admitted it is difficult to say when the England international will return.

Speaking to reporters on Tuesday, Taylor explained that Houghton’s injury was one she picked up in the first leg of City’s Champions League last 16 tie. The defender was not subbed off in that game and played 90 minutes four days lateragainst Everton, but is now suffering with the problem.

“I think its one that we anticipated would have settled down by now,” Taylor said. “Its probably not settled down as quickly as wed like, or certainly as Steph would like. Shes obviously really disappointed to not be here with the team.

“Its really difficult to answer really when shed be back. Were hoping its not too far away, but again, well always look at whats the right thing for the player.

It islikely that U.S. womens national team star Abby Dahlkemper will be partnered with Englands Alex Greenwood in the centre of defence. That is the pairing that kept a clean sheet against Bristol in City’s last game and that duo have been Houghton’s most frequent partners in the team this season.

Greenwood has played left-back a lot in her careerbut has played more centrally this season under Taylor. That means the spot on the left may be occupied by Esme Morgan, one of City’s young talents, or Demi Stokes, although the England international is only just back from her own injury.

Speaking about Houghton’s absence on Tuesday, and possibly rising to fulfil that leadership voidas a World Cup winner, Dahlkemper said: “Steph is such a quality player and she brings so much this side, on and off the field. Shes our captain and such a top class centre-back.

“The centre-back position, you have to lead and talk and communicate and dictate everyone around you, because you can see the whole field. I think its just important to focus on my game and try and do whatever it takes to help the team win.”

Taylor added: “Of course, were fortunate in the respect that we have good cover. If you look at our last three or four games in all competitions, weve been struggling for fullbacks and weve had people whove gone in and done fantastic jobs, the likes of Esme, and Georgia Stanway have done great.

“Were fortunate now weve got Lucy [Bronze] back, weve got Demi back. Obviously, we would love to have the skipper there, our captain, but we got by without her previously against Fiorentina.”