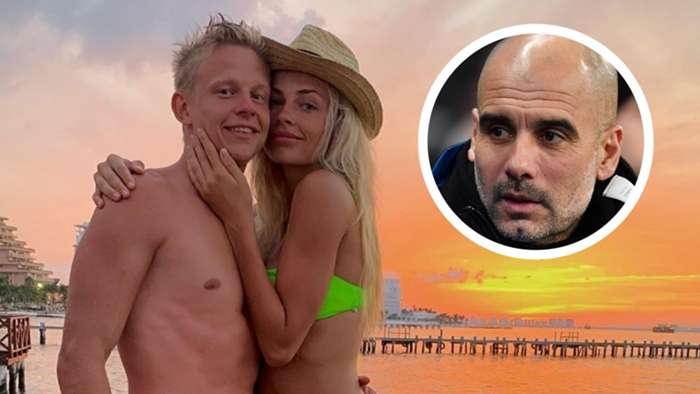 The fiancee of utility man Oleksandr Zinchenko has branded Manchester City's unceremonious exit from the Champions League at the hands of underdogs Lyon as “completely Pep Guardiola's fault”.

The Catalan coach saw his side ousted from Europe in shock circumstances, the favourites losing 3-1 to the lesser-fancied French outfit, who were themselves eventually dumped out of the competition by finalists Bayern Munich.

Guardiola generally deploys his teams in either a 4-3-3 or 4-2-3-1 system, but opted to switch to three at the back for their crunch clash with OL.

Zinchenko's other half, presenter Vlada Sedan, believes that deviating from the norm is what ultimately cost City in their quest for elusive European silverware.

“You saw what happened,” Sedan said on her official YouTube channel. “I'm not a football player, not a coach, not a critic or an analyst. I understand that my opinion is not authoritative.

“Perhaps I have no right to say this, and perhaps Zinchenko will forbid me. But to put it mildly, in order not to swear, this is completely Guardiola's fault.

“At such a crucial moment, using such an experimental tactic for City was a bummer. I have no right to criticise, but why play three central defenders? I simply have no words because to have such a line-up... look at the players City have, what a bench. Literally on a few clubs in the world can boast having such players at substitutes.”

She added: “I understand why the team that everyone is betting on is Bayern. It's one thing to be knocked out by Bayern, but it's another to get knocked out by Lyon. I don't want to cause offence to the team, but I want to remind you that this is the side that finished in seventh place in the French championship.”

Whether Sedan's comments will result in her fiancee being reprimanded remains to be seen, but with Benjamin Mendy struggling to stay fit, Zinchenko operating as a makeshift left-back and Barcelona registering their interest in Angelino, Guardiola may have a fresh headache on his hands.