Marcelo the weak link? Real Madrid star is only player to feature in all Zidane's La Liga defeats 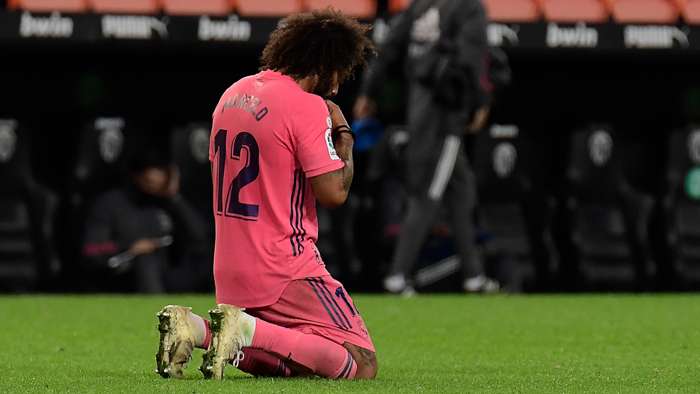 Statistics suggest that Marcelo has become a weak link in the Real Madrid squad, as he is now the only player to have featured in all of Zinedine Zidane's La Liga defeats in his second spell at the club.

The Blancos were by far the most consistent side in La Liga last season, but their performance levels have dipped significantly in the early stages of the new campaign.

Warning signs were shown during a 1-0 defeatto Cadiz at Santiago Bernabeu last month, which was followed by a loss to Shakhtar Donetsk in the Champions League at the same venue, but Zidane's men hit a new low point at the Mestalla.

Karim Benzema gave Madrid a 23rd minutelead in the contest, but a Carlos Soler penalty levelled the scoreline before Raphael Varane put through his own net to give Valencia a 2-1 half-time lead.

Soler scored two more penalties in the second period as the Blancos' defence capitulated, with Marcelo putting in another underwhelming display at left-back, giving away one of the spot-kicks while also picking up a yellow card.

The Brazilian has now appeared in all nine of Zidane's top-flight losses since his reappointment at the Bernabeu in March 2019, and Madrid have a much more favourable record when he has been absent.

Zidane hasn't seen his side lose any of the 29 La Liga fixtures he has overseen without Marcelo over the past two years, with his latest showing likely to lead to an increase in calls for Ferland Mendy to take his spot in the team on a permanent basis.

The two men have shared duties in defence since Mendy's arrival at the Bernabeu from Lyon last year, but the Blancos head coach now has a decision to make to try and address an alarming number of goals being shipped at the back.

Madrid will now benefit from a two-week break over the international recess before returning to Liga action away at Villarreal on November 21, withtheir focus set to switchback to the Champions League thereafter.