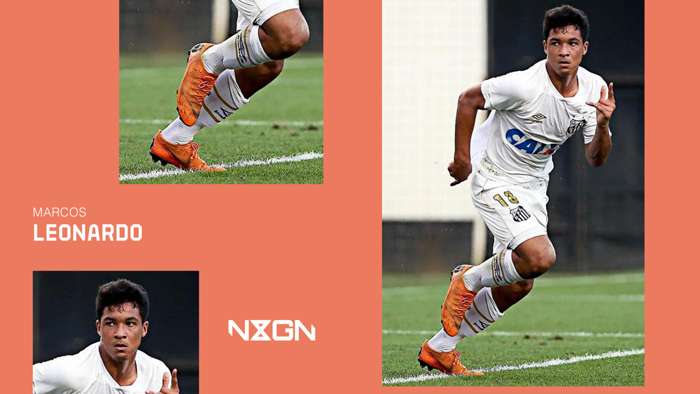 Neymar, Gabigol, Rodrygo– the Santos academy has a strong recent record when it comes to producing attacking talent.

Despite having only just turned 17 in May, Marcos Leonardo is already making his mark on the first team, after finding the net on over 100 occasions since joining the club as an 11-year-old.

Though not yet a starter for the Brazilian giants, it is seen as only a matter of time before he earns that opportunity as the latest 'Menino da Vila' – a term used to describe youngsters who have grown up within the academy structure –to emerge at Estadio Urbano Caldeira.

Born in Itapetinga in the north east of Brazil, Leonardo took his first footballing steps under the watchful eye of his father at the 'Athlete for Christ' programme, which helped underprivileged children through the power of the national game.

His talent was immediately clear and it was soon decided that Leonardo'sfamily would move 950 miles south and relocate to Sao Paulo in a bid to catch the eye of one of Brazil's biggest clubs.

By the time 2014 rolled around, Leonardo had been picked up by Santos, and set about impressing their coaches right away.

"I noticed a very strong nose for the goal, that he was opportunistic and always well-positioned," Gustavo Roma, the club's Under-13s coach, told the Santos website of Leonardo, who even then was playing two years above his own age.

"He is a very good finisher, he always tries to be present in every game, is very mobile and intense, with a very good intuition. He is not static waiting for the ball to arrive, he moves to find the best positionto be able to finish. That's why he scores so many goals."

As the lead central striker within the club's youth system, his goalscoring record is unrivalled, with many hopeful he can go onto surpass the achievements of Gabigol and succeed in the European game as well as in South America.

The early signs are good, after he was called-up to train with the first-team squad back in July.

At the time, then-manager Jesualdo Ferreira referred to him as "the greatest jewel of the Santos academy", and he has lived up to that billing with a series of impressive cameos off the bench.

Having made his debut in August as an 80th-minute substitute against Sport Recife in Serie A, it was on his fifth appearance that he began to make headlines after scoring what turned out to be the winner in a 3-2 victory over Goias.

Pulling away from his marker at the back post, Leonardo showed the perfect striker's instinct to meet a low cross on the edge of the six-yard box and send the goalkeeper the wrong way with afirst-time finish.

His second senior goal came about in almost identical fashion, though this time it came in the 90th minute of October's Copa Libertadores clash with Defenca y Justicia.

Aged just 17 years and 173 days, he became the sixth-youngest player to ever find the net in the continental competition, with his winning goal in the 2-1 victory, placing him just behind Rodrygo and Brazil legend Ronaldo on the list.

New Santos manager Cuca is aware of the talent he has on his hands, though he is keen not to thrust too much pressure onto a player who is already being spoken about as the man to inherit the Selecao's No.9 jersey in the coming years.

"Of course, Marcos Leonardo is going to be a great player, but he is only 17," he told reporters."He is still growing mentally and physically. We cannot throw a boy like that in to lead the team."

Leonardo will likely have to wait until fellow teenager and U17 World Cup-winner Kaio Jorge moves on before becoming a regular starter at club level, and there is hope the latest attacking talent off the Santos production line will stick around for some time yet.

Though Leoonardo's contract only runs until 2022, it includes a€100 million (£90m/$119m) release clause– a fee that, if met, would represent the largestever received byAlvinegro Praiano.