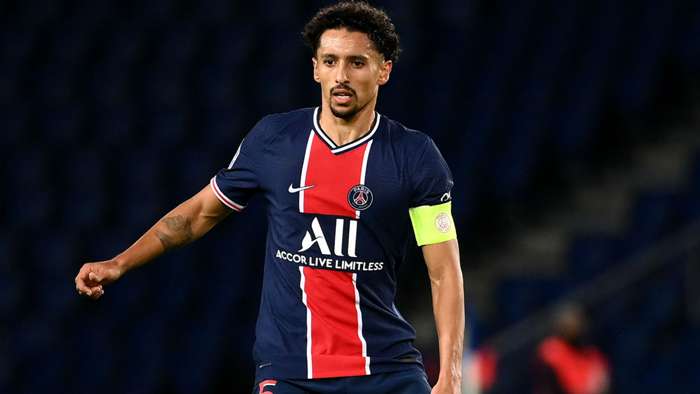 Marquinhos believes he could spend the rest of his career at Paris Saint-Germain, with the versatile Brazilian prepared to ignore any transfer talk as he plans long term in France.

He has figured as a centre-half and holding midfielder for PSG, collecting six Ligue 1 titles and numerous other domestic prizes along the way.

A regular role has also been nailed down at international level, with Marquinhos up to 49 caps for his country.

He is happy with the path his career has taken and has no plans to head in a different direction any time soon.

It has been suggested at various intervals that his talents have been registering on recruitment radars elsewhere, but he is tied to a contract through to 2024 and intends to remain in Paris well beyond that point.

“I think so, yes,” he told PSG TV when asked if he sees himself sticking around for the foreseeable future.

“It’s true that in football things move so quickly. It depends on the circumstances and how things evolve. But right now I’m thinking about staying at Paris Saint-Germain for as long as possible.

“I’ve got responsibilities here. I’ve managed to achieve my personal goals as well as some collective objectives, but there’s more to achieve on that front.

“I want to bring as much as I can to the team and the club, to really see it grow.”

Marquinhos forms part of a star-studded squad at PSG, with big spending allowing them to remain competitive across multiple competitions.

The standards being set in the French capital are helping those on Thomas Tuchel’s books to raise their games individually and as a collective.

Marquinhos falls into that category, with his ability put to the test every day in training.

Asked to pick out the toughest team-mate he has faced, the Brazilian said: “Every day in training it’s tough, coming up against Ney, against Kylian Mbappe and against Zlatan Ibrahimovic when he was here.