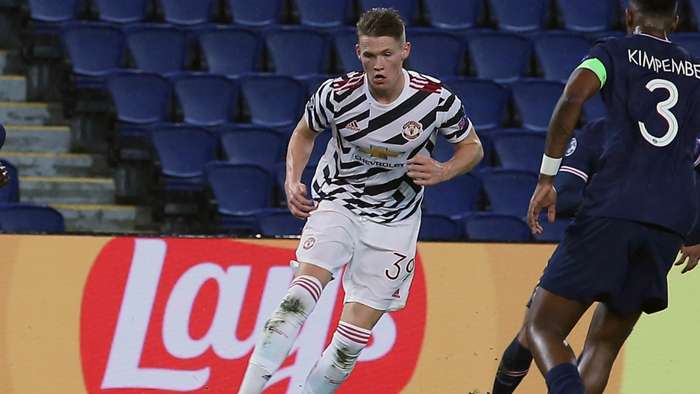 Manchester United manager Ole Gunnar Solskjaer revealed midfielder Scott McTominay played with "one eye" in the first half of the team's Champions League victory against Paris Saint-Germain after losing a contact lens.

As Paul Pogba, Nemanja Matic and Donny van de Beek watched from the bench in the first half, McTominay performed well for United, who took a 1-0 lead into the break thanks to Fernandes' 23rd-minute penalty in Paris.

Anthony Martial's own goal in the 55th minute gifted PSG an equaliser, but Marcus Rashford netted United's match-winner with three minutes remaining at Parc des Princes, where the Red Devils claimed a record 10th consecutive away victory in all competitions.

Solskjaer singled out McTominay post-match, telling reporters: "Scotty played the first-half with one eye as well, that was the most impressive thing, because he lost his contact lens. That was impressive."

Fernandesopened the scoring with his 11th spot-kick for United following a re-take. Since2012-13,PSGhave conceded more penalties (18) and more penalty goals (13) in the Champions Leaguethan any other side.

Martial, though, headed the ball into his own net early in the second half as Ligue 1 champions PSG restored parity behind closed doors.

But Rashford fired a fine finish into the bottom-left corner of the net from the edge of the penalty box.

Rashford's last three goals in the Champions League have all come on the road, with the last two netted at Parc des Princes.

"He's a good footballer and he's got quality. And he took his goal very well; great turn, good finish and into the corner. He likes that side of the Parc des Princes stadium, I think," Solskjaer said.

"I think when you're doing well on the pitch as well as off the pitch, they marry well together. And I am sure he knows…I think it gives him energy what he does so that's not a problem."

On comparisons between Rashford and PSG star Kylian Mbappe, Solskjaer added: "I think he's a very, very good striker. It's difficult to compare them but both are going to be top, top strikers for 10-15 years.