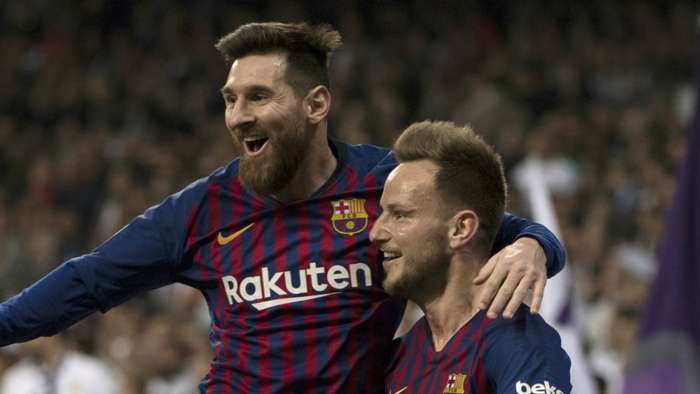 Lionel Messi is the "only number one" in football, according to Ivan Rakitic, who says it was a "dream" to play alongside the Barcelona superstar for so many years.

Messi was often the man to get on the end of theCroatia international's searching passes in the final third, as the two men enjoyed an effective partnership that garnered four La Liga titles and the Champions League during a six-year period.

The Argentine is generally regarded as the greatest player of his generation, having won a record six Ballon d'Or awards while establishing himself as Barca's all-time record goalscorer, but Raktiic thinks he is also head and shoulders above legendary figures of bygone eras.

Asked what he thinks of Messi as a player, the 32-year-old midfielder told FIFA.com:"One hundred per cent football. It doesn’t matter who you are, you just have to watch and enjoy this guy. He’s on another level.

"With all respect to the other greats, there’s only one number one – it’s Leo. To play 311 games next to him, it was a dream.

"I enjoyed it so, so much. I just want to say this: ‘Thank you for everything, Leo, because you’ll never know how much it meant to me to play next to you.'"

Rakitic returned to Sevilla in September after being deemed surplus to requirements at Camp Nou, but says he will always look back on his time with Barca fondly for both professional and personal reasons.

"Six years, 311 games – the foreigner with the fourth-most games after Messi, Dani Alves and Mascherano – 13 titles. I think I can say that I’m part of the history of the club," he added.

"I got so much out of those six years. I will have Barcelona – the club, the city, the people – in my heart for the rest of my life. My family got bigger there – my youngest daughter was born in Barcelona.

"I’m really proud of my time there and will always cherish it."