'Messi is very welcome at PSG!' - Tuchel open to move for Barcelona star 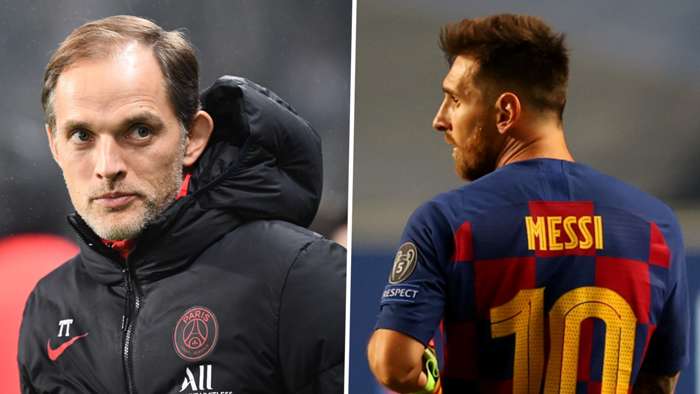 Paris Saint-Germain manager Thomas Tuchel has declared Lionel Messi is "very weclome" to join the club should the Barcelona star decide to pursue a move away from Camp Nou.

The Argentine legend has once again been linked with a possible Barcaexit after seeing his side end the season without a trophy and lose 8-2 to Bayern Munich in the Champions League quarter-finals.

Tuchel himself failed to guide his side past Bayern on Sunday as the Bundesliga giants claimed their sixth Champions League title with a 1-0 win over PSG.

The Ligue 1 champions are one of few clubs in the world that could potentially afford a move for Messi and Tuchel conceded he certainly wouldn't say no to having the 33-year-old to join his side.

"He Messi is very welcome! We lost lots of players for this campaign only and we lose now Thiago Silva and Eric Maxim Choupo-Moting. We need to use the transfer window now to make the squad bigger," Tuchel told BT Sport.

"The campaign will be very demanding without any breaks. We need to build a strong, strong squad.

"We decided not to talk about transfers in this period here. We will sit together in the next days. We have many things to do to keep the level of the squad.

"What coach says no to Messi? I think Messi finishes his career in Barcelona. He is Mr Barcelona."

Despite a few chances to strike against Bayern, PSG were unable to triumph in their first Champions League final and Tuchel called on his men to rebound quickly next season.

"It is nessecary if we want to keep the same level, we have to step up again. You have to go on. This level is necessary," Tuchel said.

"We showed again we can compete with the best teams in Europe with this mentality and attitude, in combination with our talent.

"We are a strong, strong side. We can be proud of that. We cannot worry too much because it is okay and we will go on."