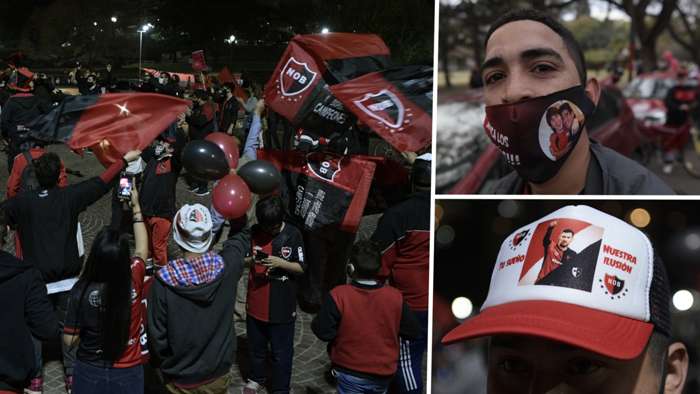 "Your dream, our desire." That was the recurring slogan spotted on the streets of Rosario on Thursday as Newell's Old Boys fans paraded in a push to convince Lionel Messi to return to his boyhood club.

After nearly two decades at Camp Nou, however, the now 33-year-old has handed in a shock transfer request as he looks to move on from theclub that failed to win a trophy last season.

While Manchester City are the favourites to sign Messi should he secure an exit ,Newell's haven't given up hope of the Argentine returning, with the club's faithful taking to the streets in a show of support.

As it stands, Messi returning to Newell's is a long shot , with even the head of their English supporters club,Jamie Ralph, hopeful but conceding a reunion right now is unlikely.

"Personally I think it’s a bit too soon, but what people need to understand is that Newell’s have a bit of a track record of pulling flagship signings out of nowhere, and that’s why people think it’s not that impossible," Ralph told the PA news agency .

"Diego Maradona was at Sevilla in Spain – he was only 33, so he was the same age as Messi – and he came back and signed for Newell’s, which was unbelievable at the time. This was the year before the ’94 World Cup.

"There’s this real feeling that for players who come through the club, money doesn’t matter, it’s really the feeling to come back and play for their shirt again in front of the fans and really feel that you’re part of that club again.

"There’s a bit of romanticism going on. I do think Messi will play for Newell’s one day, but personally think it’s a little bit too soon."

Newell's Old Boys vice-president Cristian D'Amico,meanwhile,recentlyreiterated that the doors are open for Messi to return to the club.

"I don't know if it is impossible. It is all up to him and his family," the director told TNT Sports .

"As directors we have to provide the best context possible to help him make a decision. When Maradona came to Newell's nobody thought he could come. I hope that something similar can happen with Leo.