Messi vs Ronaldo on FIFA 21: How football titans' ratings compare 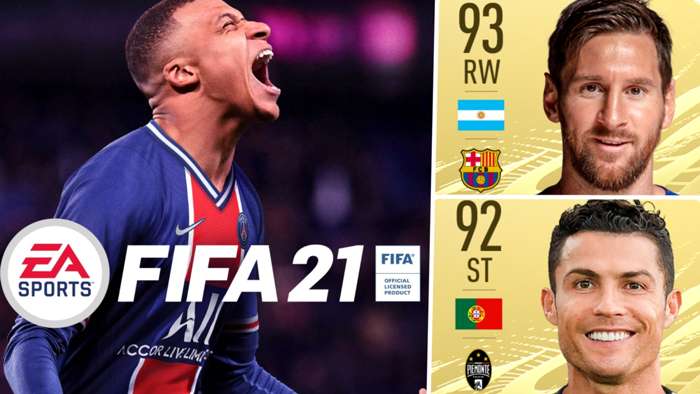 Lionel Messi and Cristiano Ronaldo may be getting onas far as their playing careers are concerned, but the pair remain the best two footballers in the world.

The gap is closing, of course, and time will eventually catch up to each of them, but they are the standard bearers for now.

How exactly do they compare on FIFA 21 and who is better? Goal takes a closer look at Messi and Ronaldo's ratings on the game.

Messi is rated 93 overall in FIFA 21, which makes him the best player in the game. Interesingly, the Argentine's rating has actually gone down one from his rating in FIFA 20, which was 94.

Despite his advancing years, Messi's pace remains relatively high at 85, though it has dropped two points from what it was FIFA 20.

His dribbling, shooting and passing ability marks him out as the best in the game, but even these attributes have fallen slightly from the previous edition.

Ronaldo's FIFA 21 rating is 92, which makes him the second best player on the game, just behind Messi.

It is the second FIFA game in succession that Ronaldo's overall rating has dropped, having gone down from 94 in FIFA 19 to 93 in FIFA 20.

The Portugal star's pace, passing and physical ratings have all dropped one point. His pace is down from 90 to 89 and his passing is now 81, having been 82 in the last game.

It is perhaps no surprise that his physical rating is down from 78 to 77 too, considering he is now 35.

There is not a lot of difference between Messi and Ronaldo on FIFA 21, but there are a few notable areas where one is better than the other.

Messi's dribbling ability is better than Ronaldo's (96 yo88), but the Piemonte Calcio star has a higher 'skill move' rating, boasting a five-star rating to Messi's four stars.

The Argentine's 'skill move' rating is also worse than that of Neymar, Memphis Depay, Kylian Mbappe and Jadon Sancho, among others.

Given Messi's vastly superior haul of assists throughout his career, it is no surprise that the Barca captainis a better passer of the ball on the game. His overall passing rating is 91 to Ronaldo's 81, with his vision attribute blowing his Portuguese counterpart out of the water (95 against82).

Interestingly, Messi's acceleration is better than Ronaldo's (91 to 87), but Ronaldo's sprint speed is much better (91 to 80), meaning he is quite a bit quicker off the mark.

Both players like to stand over free kicks for their clubs, but there is little doubt as to who the better set-piece taker is, with Messi boasting a FK accuracy rating of 94 to Ronaldo's 76. In fact, Messi is considered the best free kick taker on the game.

Ronaldo does have a natural edge on Messi when it comes to heading the ball - perhaps unsurprisingly considering his greater height - with a rating of 90 for heading accuracy and 95 for jumping.