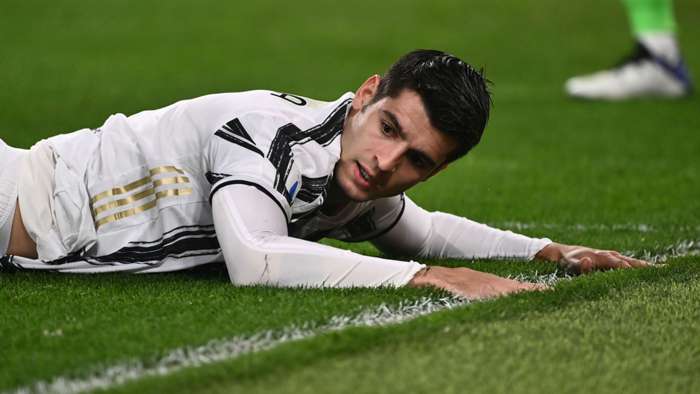 Alvaro Morata is set to sit out Juventus’ crunch Serie A clash with AC Milan on Wednesday on account of injury.

The absence of their key forward was not felt by Juve, who ran out 4-1 winners over Udinese to keep pace with Milan at the top of the table.

Juventus trail the Rossoneri by 10 points, albeit with a game in hand, and they will in probability take on Milan without Morata who is struggling to shake off the thigh complaint.

“He had a problem in his last training session; we will have to evaluate him in the coming days,” Pirlo said. “He is unlikely to be available on Wednesday.”

Paulo Dybala stepped in to lead the line against Udinese and was rewarded with his second goal in three outings.

The Argentina international appears to be hitting form at a good time for Juve, and his performance impressed Pirlo.

“We need Dybala, he needs us,” Pirlo said. “He worked very well during the week in training; we could tell during the match that he was in better physical condition and we kept him on to the end because we hoped he would score that goal.”

While Dybala put in an impressive performance against Udinese, he is not a true No.9 and Pirlo may look to push for a striker in the January transfer window to ease the pressure on Morata.

Chelsea forward Olivier Giroud has emerged as a target, and Pirlo confirmed his interest in the France international.

When asked about a possible move for Giroud, Pirlo said to DAZN: “He'd be handy!

“The window opens tomorrow, we already discussed with the club what we want to do and if there are any opportunities. Maybe a striker that can rotate with our strikers.”

Chelsea’s defeat to Manchester City left their title hopes on rocky ground, and Giroud may be tempted by a move to Turin - particularly if he can gain more playing time to bolster his chances of booking his place in the France squad for this summer's European Championship.