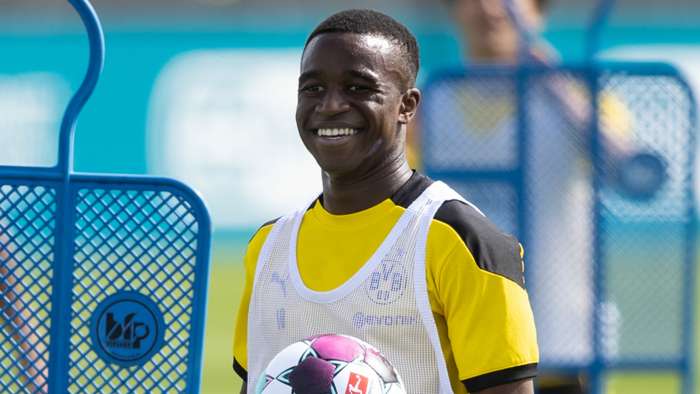 Youssoufa Moukoko will "break many Bundesliga records", according to his former coach Michael Feichtenbeiner, who has hailed the Borussia Dortmund teenager as an "outstanding talent".

The 15-year-old has hit a staggeringhitting 127 goals in 84appearances for BVB's academy sides and has also managed to lay on 26 assists, proving himself as both a prolific marksman and an inventive playmaker in the final third of the pitch.

Moukoko has been training with Dortmund's senior squad since August, with the club handing him the No.18 shirt to mark his step up to the professional level.

The forward is even being touted to make his full debut when Lucien Favre's side takes in a trip to Hertha Berlin this weekend, as Bundesliga rules will permit him to be available for selection when he turns 16 on Friday.

Moukoko will become the youngest player to ever feature in the German top-flight if he is handed some minutes atTheOlympiastadion, andFeichtenbeiner says this is only the beginning for the player with limitless ability.

Asked if the BVB starlet is the most talented player he has ever worked with, theex-Germany U16s coach told Goal and SPOX:"Definitely.Such a talent does not come along in Germany every five years.

"His football skills are simply outstanding and he is a player who can make all the difference.He scored his goals everywhere - and there will be no end.

"Youssoufa will break many records in the Bundesliga."

Pressed on whether a player who has already represented Germany at U20 level will be an immediate success at Dortmund, Feichtenbeiner responded: "Yes.He has this great determination and a very neat finish with his left foot.Youssoufa simply has quality.

"In an environment like Dortmund with so many young players, it's a little easier for him.You can see that in Jude Bellingham, who as a 17-year-old from England seems to have few problems keeping up with the level."

Feichtenbeiner also offered an insight into how advanced Moukoko's skills were when he joined Germany's international set up at the age of 12, describing him as "extraordinary".

"He was physically extremely far, had good muscles and overall compact athletic, physical conditions - even at twelve.It was just a great fit for this class where the other players were two years older," he said.

"The fact that he still scored as he wanted and did not show any star behaviour, that was extraordinary."

The 60-year-old added on Moukoko's temperament:"Youssoufa is a very kind and completely normal boy.He just wants to play football.For me as a coach, with all the hype around him, it was reassuring to see that he remained a child on the pitch.

"He had fun with his teammates and in training everything around him was forgotten because he was simply a footballer.You have to take a bow for how he puts all these things away.