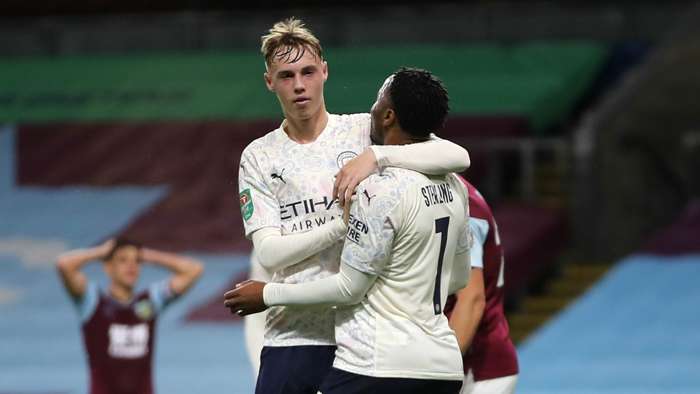 Cole Palmer was a particularly small boy emerging through the Manchester City academy when his father joked that he just needed Pep Guardiola to take over as coach for the club to fully appreciate his technical quality.

"But, honestly, to train under Pep every day is crazy, really. He's such a good manager.”

And he will be doing so for a while yet with it now confirmed that Guardiola has put pen to paper on a new contract which extends until the summer of 2023.

Palmer, however, is no longer the diminutive Barcelona-style player that progressed through the youth-team ranks at City.

While he still has an elegant touch and is a comfortable fit for City’s neat, quick passing style, a late growth spurt has seen him shoot up from the smallest player in his youth teams to now being over 6'0 (1.8 metres) tall.

However, his father was right that Guardiola would appreciate the huge potential of the Manchester-born midfielder.

The City boss has been impressed with Palmer’s impact since joining up with the first team and described him as an “an incredible young lad” with “a good future” after handing the teenager a first-team debut in the Carabao Cup victory over Burnley in October.

It was a composed first start in a routine 3-0 win, with Palmer looking at home working in tandem with Kevin De Bruyne as the creative forces in midfield.

He was close to scoring, too; forcing a good save from Bailey Peacock-Farrell before later taking the ball round the Burnley goalkeeper thanks to an outrageous dummy that created a chance which Raheem Sterling unfortunately couldn't convert.

A Champions League appearance against Marseille quickly followed and Palmer is now very much a part of an exciting group of homegrown talents– which includes Taylor Harwood-Bellis, Tommy Doyle and Liam Delap– to have emerged under Guardiola over the past 12 months.

“It's really encouraging that he gives opportunities to the younger players,” he enthuses of his boss. “I think if the younger players are playing well and if he likes them, I don't think he will hesitate to put them in a squad, so we just need to keep going really.

“We just have to be patient and when you get the opportunity, just try and take it as much as you can.”

Palmer has been with the club since he was eight, after choosing City ahead of Manchester United.However, he also had trials and Bolton and Liverpool, who rejected him because they didn’t think he was good enough.

His decision to pick City has certainly paid off, though. Following the move to the state-of-the-art Etihad Campus in 2014, City have established one of the best academies in the country, reaching the FA Youth Cup final for six of the past seven years and unearthing gems such as England internationals Phil Foden and Jadon Sancho.

However, it wasn’t until the 3-2 victory over Chelsea in November that City finally ended their 12-year wait for FA Youth Cup glory, and it was Palmer who netted their 83rd-minute winner.

It was a memorable night for him, and not just because it was redemption for the previous year, when he was the only player to miss in the penalty shootout at the end of final against Liverpool.

That win over Chelsea provided a hard-earned chance to celebrate with his team-mates, some of whom he had been playing alongside for a decade.

"I was just glad to go that one step further and win the Youth Cup, which the club has been waiting a long, long, long time for," the England Under-18 international admits.

“I've been with Taylor, Tommy, Rowan MacDonald, who was injured, and Lewis Fiorini, who’s now with NAC Breda, a long time. I grew up with them.

“I’ve seen them not just on the pitch but off the pitch, so to win the FA Youth Cup with them was special.”

Academy players have to prove they are worth their place in Guardiola's stellar squad but Foden has shown it can be done. The 20-year-old has already made 84 appearances for the club and is an established England international.

“He is an example, because when you see someone do it, you think to yourself: ‘I can do it too,'” Palmer explains.

“He's a good lad, too. He's helped me a lot. He's helped me every day in training with little things and you can tell he's one of us– he chills with us, speaks to us, so it's good.

“All of them have helped me, in fairness, but especially Kyle Walker, Raheem Sterling, John Stones and Oleks Zinchenko. They are all good to the young players, so we really enjoy it.

“Obviously, they help you on the pitch but it's more off the pitch. They speak to you, have banter with you and tell you about their career, how they got to where they are so that hopefully you can do what they have done.”

Guardiola also notably described Palmer as a “humble guy” and the youngster says that his family won’t let him get carried away with his early success.

He admitted to getting nerves before his senior debut but is refreshingly relaxed about meeting the next targets in his career.

“I’m just thinking 'train every day and work hard',” he says.“I still try to go in with the mentality that there's no pressure – 'Just go and do your stuff like when you were a young kid. Just go and express yourself, work hard and see where it takes you'."