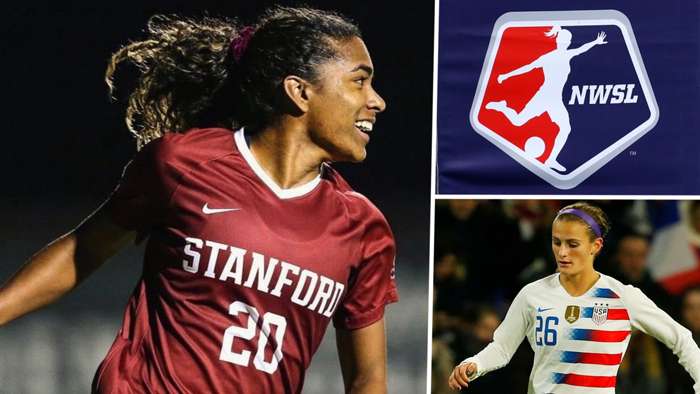 The 2021 National Women's Soccer League (NWSL) season is almost upon us, with the excitement to only build when theNWSL Draft takes place on Wednesday.

The draft will include expansion team Racing Louisville for the first time as they look to bolster their roster following the headline-grabbing Expansion Draft back in November.

Last year, Stanford's Sophia Smith was chosen by the Portland Thorns as the No.1 pick, after scoring 17 goals and providing nine assists as a sophomore in 2019. She also helped Stanford win the NCAA title for the second time in three years before becoming the first teenager to ever be selected in the draft.

This year, the Covid-19 pandemic has forced huge changes to the event. The most significant of those is a change to the player eligibility rules.

Previously, players would have to declare for the draft in order to be picked. However, after the impact of coronavirus hit college sports hard in 2020, the NWSL have now announced that all senior college athletes will be eligible without the need to register.

In the past, declaring for the draft wouldmake players ineligible for college sports. But with the college women's soccer season pushed back from the end of 2020 to spring 2021, aspiring NWSL players will have the opportunity to play their final senior season of college soccer and then turn their attentions towards becomingprofessional.

There has been some controversy surrounding the change,with any playerselected in the draft to have their rights kept by that club until the start of the 2022 NWSL pre-season begins, whether they want to play in the league or not.

Nonetheless, the positive is that players will not have to choose between playing their final college season and registering for the draft, a dilemmawhich would likelyhave deterred some.

Who will be this year's top pick, then? Catarino Macario is almost everyone's undisputed prediction. The Brazilian-born forwardacquired American citizenship last year and is set to become the firstnaturalized citizen to play for the USWNT, once she is cleared to represent the senior team. She has already been called up Vlatko Andonovski.

Macario announced last week that she will forego her final year with Stanford and turn professional, but reports say there is also interest in her from Europe, so it may be that the next chapter of her career is not in the NWSL.

Should the 21-year-old choose to move across the Atlantic, USWNT international Emily Fox could be chosen as the No.1 pick by Louisville. The defenderalready has three caps at senior level,making her debut back in November 2018 when she was just 20 years old.

Fox has spent the last four years as part of the North Carolina Tar Heels, who reached the College Cup final in 2018 and 2019.

The 2021 NWSL Draft will be streamed live on the NWSL's official Twitch channel.The event will begin at 4pm PT/7pm ET on Wednesday January 13.