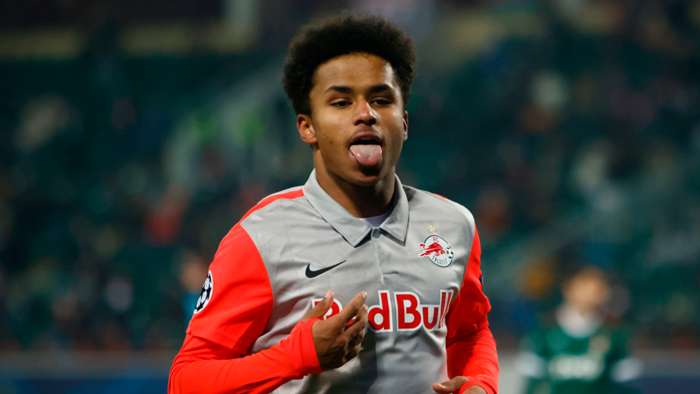 Red Bull Salzburg starlet Karim Adeyemi has been backed to have a "great international career" with Germany as he continues his development at the Austrian champions.

The 19-year-old forward broke into the Salzburg first team in the closing weeks of the 2019-20 campaign, and has gone onto make regular appearances for Jesse Marschs side this term.

His return of four goals and six assists in 2020-21 is strong for a player who has started just seven matches in all competitions, and it is expected that over the next 12 months he will continue to improve on those numbers in the final third.

"If he continues to really step on the gas and is spared injuries, I believe he can have a really great international career.

"The next step, however, is for him to really take off with us in Salzburg in the coming months."

Adeyemis talent was first noticed by Bayern Munich, but he was released by the German giants before he was even a teenager under a cloud of disagreements and issues with his attitude.

He was then forced rebuild his reputation and continue his education at lower-league outfitSpVgg Unterhaching.

It was there where some of Europes biggest clubs again began to take notice, but despite interest from Chelsea and Liverpool, he instead opted for Salzburg, joining the Red Bull Arena outfit as a 16-year-old in 2018.

He spent his first 18 months at the club playing in th youth teams and for the clubs reserve side, FC Liefering, who play in the second tier of Austrian football, before finally making the step up to the first-team ranks.

"We followed Karim very closely in the junior teams of Unterhaching and the German junior national teams," said Freund."He is a type of player whose qualities fit our style of football perfectly.

"He is a difference-making player who, with his extreme speed, was classified by our scouting department as a perfect Red Bull Salzburg player, which has been confirmed.

"Karim has developed very positively, especially as a personality, both on and off the pitch. He has become a professional and, despite his young age, already has a very good standing within the team.

"A lot has also happened with Karim in terms of football and he is on a very good path overall."

Adeyemi has already started breaking records at Salzburg having this season become the clubs youngest-ever goalscorer in the Champions League.

At the age of 18 years and 318 days, he found the net with a fine individual strike against Lokomotiv Moscow in December.

"He used his special quality, namely his speed and his carefree nature, to score his first goal in the Champions League, Freund recalled.

"You could really see the sparkle in his eyes all evening. I dont think he was able to sleep much the night after the game!"