NXGN winner Fati: It would be a dream to play at Euro 2020 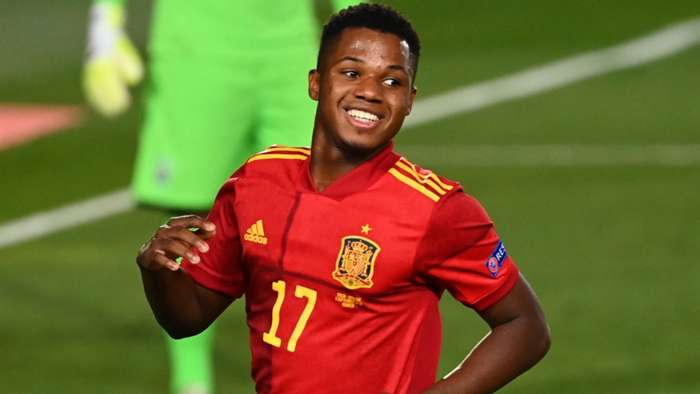 NXGN 2021 winner Ansu Fati has admitted that it would be a dream to play at this summers European Championship.

The Barcelona starlet was crownedas the top male wonderkid in football on Tuesday, as the 18-year-old topped the annual NXGN list of the top 50 players born on or after January 1, 2002.

And, as he battles back from a serious knee injury, the youngest goalscorer in the history of the Spanish national team is now eyeing a spot in Luis Enriques squad for the delayed tournament.

Speaking toGoalafter receiving the NXGN 2021 award, Fati said: "I wish I could be there, but first I have to recover from the injury.

"I dont know what will happen in the future, but it is a dream for any player to be able to play a European Championship."

He added:"I dont set goals, but I do try to improve day by day, growing as a player, and as a person."

Fati has been out of action since the start of November after suffering a torn meniscus in his left knee in Barcas 5-2 win over Real Betis.

After undergoing surgery, the Blaugranas original diagnosis wasthat the teenager would be out of action for four months.

In early February, however, it was reported in Spain that complications in Fatis recovery had led to him going under the knife again, and there was a fear that he would need to undergo a third operation to fully repair the problem.

There is hope, however, that he will play again before the end of the campaign, with the youngest goalscorer in the history of the Champions League having posted a series of videos on social media of him stepping up his recovery.

If Fati is able to prove his fitness, then he has a good chance of being included in La Rojas 23-man group for this summers continental championship.

Having made his international debut in September, Fatibecame his countrys youngest ever goalscorer when finding the net at the age of 17 years and 311 days against Ukraine on just his second appearance for Luis Enriques side.

The previous record was set in1925 by Juan Errazquin, who netted his first goal for Spain 21 days short of his 19th birthday.

Fatis impressive performances during the UEFA Nations League meant led to him being regarded as a shoo-in to make Spains squad for the Euros before his injury.

He would likely have to beat off competition from the likes of Adama Traore, Dani Olmo and Bryan Gil to be considered now, presuming he is injury-free come June.

Fati is the sixth male winner of the NXGN prize, following in the footsteps of the likes of Jadon Sancho, Gigi Donnarumma and Rodrygo.

Youri Tielemans and Justin Kluivert have also previously taken home the award, which has been run annually by Goal since 2016, with journalists from 44 editions worldwide voting for the best teenage footballers on the planet.

"First of all, I want to thank the people who have voted for me and, of course, my team-mates –without them, this would not have been possible," he said. "Also, thanks to all the coaches I havehad."

Fait is joined atop the podium in 2021 by the womens winner, Hanna Bennison of Rosengard.

The Sweden international midfielder follows in the footsteps of the first female winner, Lena Oberdorf, who claimed last years trophy.