Napoli stars Koulibaly & Milik 'are on the way out', says president De Laurentiis 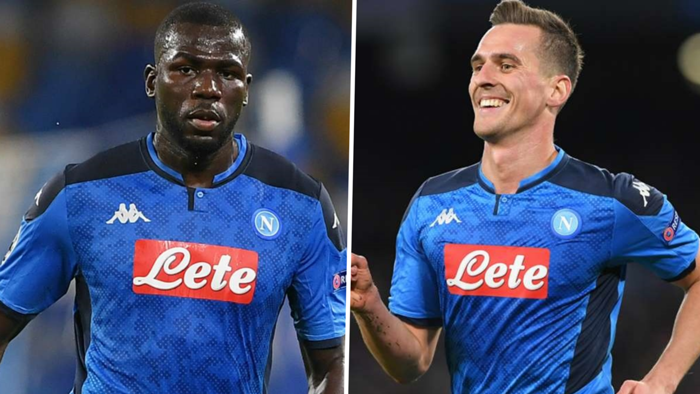 Napoli President Aurelio De Laurentiis has said that star duo Kalidou Koulibaly and Arkadiusz Milik "are on the way out, transfer market permitting."

Senegal international Koulibaly has long been linked with a big-money move to the Premier League, with Liverpool, Chelsea and Manchester City all reported to have an interest.

Milik, meanwhile, appears set to stay in Italy and join either Roma or Juventus after he found the back of the net 11 times in Serie A last season.

Though both players appear close to the exit door, DeLaurentiis has insisted that neither will be sold unless Napoli's asking price is met.

“Koulibaly and Milik are both on their way out, transfer market permitting,” De Laurentiis told Canale 21.

“So, if the transfer market allows us to sell these two excellent players, we will know how to replace them. If not, then we’ll discuss it again next year.”

City have been strongly linked withKoulibaly as Pep Guardiola's side look to strengthen in defence after falling short in the Premier League and Champions League last term.

The Blues have already sealed a£40 million ($52m) move for Bournemouth defender Nathan Ake, but they may have to shell out even more to landKoulibaly.

The Napoli chief toldSky Italia: "Kalidou is a great person, I would be terribly sad to lose him.But there is a time for everything, even to move apart.

Koulibaly joined Napoli from Belgian side Genk in 2014 and has a contract with the Serie A side through 2023.

Milik's deal with Napoli expires at the end of the upcoming season, meaning the club will have to sell soon if they wish to avoid the possibility of him leaving on a free.