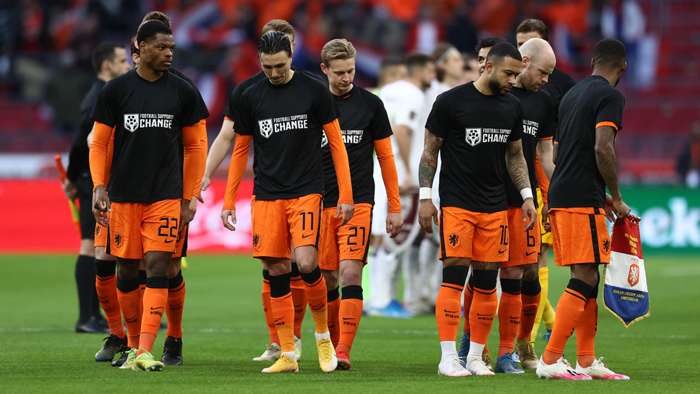 The Netherlands have joined Germany and Norway in protesting againstQatars human rights record ahead of their World Cup qualifying clash with Latvia on Saturday.

The display representeda stand against the 2022 World Cup hosts alleged violations against migrants in the Gulf nation.

It has been reportedthat thousands of migrant workers have died during the construction of stadiums in Qatar in recent years, with the showpiece tournament due to be staged in the country in 2022.

The Oranje lined up in T-shirts that proclaimed "Football Supports Change"ahead of kick-off in their second match of the qualifying campaign in Amsterdam.

The demonstration follows a similar one made by the Norway team, who wore shirts bearing the message "Human rights on and off the pitch" before they faced Gibraltar and Turkey in World Cup qualifying.

Germany, meanwhile, also lined up in T-shirts that spelled out "human rights" prior to taking on Iceland in their qualification clash on March 25.

Norway coachStaale Solbakken said thatthe protest was an attempt to put "pressure on FIFA to be even more direct, even firmer with the authorities in Qatar, to impose stricter requirements".

Netherlands boss Frank de Boer, meanwhile, stated:"A lot of attention is now focused on whether we should go there if we qualify.

"It is right to ask that question.Everyone knows that what is happening there is not good.

"Human Rights Watch and Amnesty International have said that if we go there, we can better promote the cause."

A letter sent to FIFA president Gianni Infantino earlier this week read: "FIFA has a responsibility to mitigate human rights risks that arise from the increase in business in these related sectors created by the tournament.

"At a minimum, this means FIFA should use the full extent of its influence to urge Qatar to urgently implement and enforce the government’s own reforms to ensure that the labour rights of all migrant workers are protected."

Qatars legislative body last month announced recommendations to strip migrants of rights they were only recently given.

The recommendations includedremoving migrant workersrights to change jobs during their contract,limiting the number of times they can switch, andincreasing the proportion of workers whorequire exit permits to leave the country.

Qatars Supreme Committee for Delivery and Legacy (SC), who are responsible for delivering the infrastructure forthe 2022 World Cup, have issued the following statement:

"We have always been transparent about the health and safety of workers on projects directly related to the FIFA World Cup Qatar 2022. Since construction began in 2014, there have been three work-related fatalities and 35 non-work-related deaths. The SC has investigated each case, learning lessons to avoid any repeat in the future. The SC has disclosed each incident through public statements and or Annual Workers’ Welfare Progress Reports.

"Preparations for the first FIFA World Cupto be held in the Middle East and Arab world have already brought significant benefits to workers on SC and non-SC projects in Qatar. These include significantly improved accommodation facilities, the provision of electronic medical records and comprehensive medical checks, innovative heat stress mitigation plans, extensive training and upskilling programmes and a guarantee from SC contractors to reimburse USD $30m+ in illegal recruitment fees to 48,883 SC and non-SC workers.

"With less than two years until the tournament begins, we will continue to use this opportunity to deliver sustainable change and leave a meaningful legacy beyond 2022."