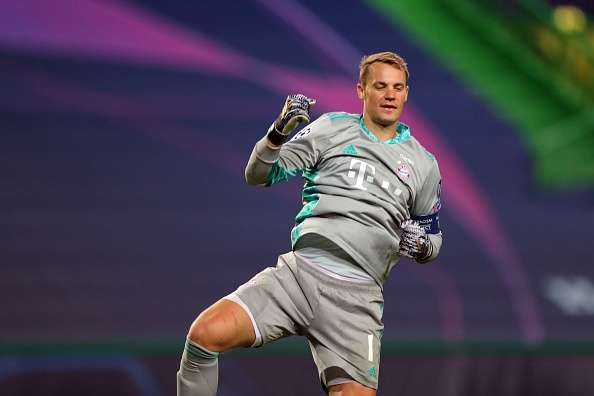 Bayern lifted the cup for the sixth time in their history by beating PSG 1-0 in the showpiece event in Lisbon on Sunday .

Kingsley Coman's second-half header proved to be the difference between the two sides in an open game which saw the Ligue 1 outfit squander a number of clear-cut opportunities. Neymar and Kylian Mbappe both had chances to open the scoring in the first period, but failed to find a way past Neuer in the Bayern net.

The Germany No 1 also kept out Marquinhos as Hansi Flick's side protected their lead in the final 30 minutes, with PSG ultimately left frustrated in their pursuit of a first-everChampions League crown.

Tuchel bemoaned Neuer's brilliance between the sticks in his post-match interview, telling reporters:“We have Keylor Navas, but Neuer was in top form at the wrong moment.He took the goalkeeping game to a new level.Unfortunately for us."

Marquinhos also reflected on a painful defeat in Portugal, urging his team-mates to dust themselves off quickly after taking major strides forward as a team in 2019-20.

“The victory did not come. You don’t play a final, you win it but we did not manage that," the Brazilian toldRMC Sport. "On the other hand, we are all proud of our team. Nobody believed in our ascent. We succeeded in taking a step forward.

"We have to be proud to have made it to the final, and be disappointed because we did not win it. We will have to continue down this path, in terms of sacrifice, in terms of togetherness.

"We have to continue with this solidarity on the pitch which we have had since the beginning of the season. Now, it is the moment to go back to what we are used to in Paris, think about next season, see if we can do better.”

Marquinhos added on PSG's lack of cutting edge against Bayern:“It was a final with a lot of tension. We played to our strengths, so did they. This is a team that had possession. We did not manage to finish off our chances.