Neville: Man City & Everton players should want to play for England and in FA Cup final 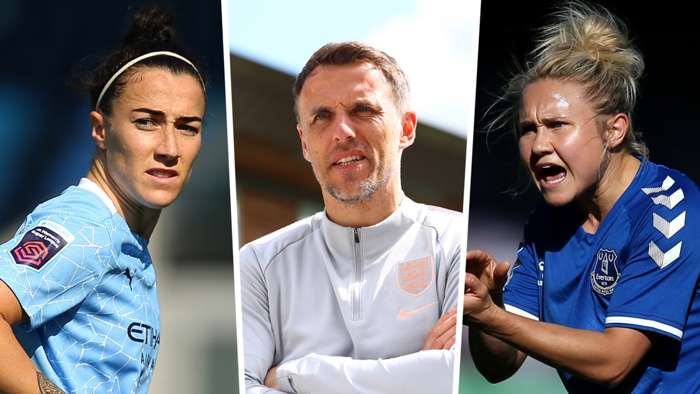 Phil Neville hopes thatthe Manchester City and Everton players in his latest England squad will have no complaints about playingagainst Germany and then in the FA Cup final in the space of five days.

Of those 13, a staggering 11 will be in contention to represent City at Wembley, which may be a concern for Gareth Taylor, head coach of the reigning FA Cup champions.

However, Neville is hopeful that there will be a real appetite among those players to take part in both fixtures, particularly with the Covid-19 pandemic having denied players of a lot of these huge games.

Asked if he had spoken to Taylor, the England boss said: "I have not yet had that conversation. I think if we had adouble header, a couple of games, it would have been part of my thinking, players playing three big games in a short space of time.

"But ultimately, I put myself in the shoes of a player. We have waited a long time to have games of this magnitude - agame against Germany and one against Everton in an FA Cup final at Wembley.

"I think if you ask Steph Houghton, Lucy Bronze, all those players, they would want to play both.

"I think we are at a level now where our players, physically, can do both and that shows how far we have come.

"If I were Gareth or Willie Kirk, Everton head coach I would have one eye on the cup final, making sure their players got back to their clubs safely. But I would always want them playing at the top level because that would benefit them and their clubs."

One player Taylor will have well-rested for that FA Cup final is a very unlucky Gemma Bonner, Houghton's centre-back partner at City,who isonce again a notable omission from Neville's squad.

It's been almost a year now, going back to when England played the Czech Republic in November 2019, since the 29-year-old was involved with England.

"Going back to my career, Steve Bruce and Gary Pallister were the best partnership that I played with because they played together week in week out, so that is something we are looking at.

"Gemma has been really unfortunate that she is probably just below the four experienced centre-backs that I’ve always selected. We’ve communicated a lot with Gemma, we realise the level of performances she is producing, but ultimately other players are playing well as well.

"I think what we respect is the fact that, in the Women's Super League now, we have a lot of English centre-backs playing to a really good level and Gemma is part of that group that we watch, we review, discuss -but ultimately you can only pick four, or five or six in this one.

"Grace Fisk is one we want to develop for the long term. We probably realise at this moment in time that she is still developing as a player and she has great attributes, but she’s got other attributes that need to be developed.